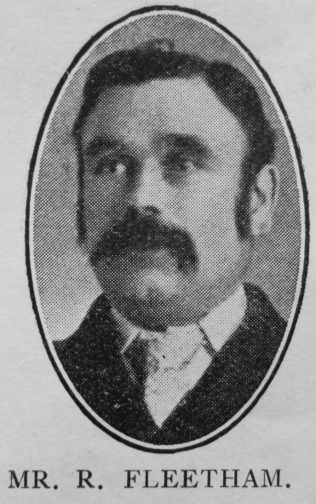 Transcription of obituary published in the Primitive Methodist Magazine by J. Teece

Wetwang Society, Driffield Circuit, has suffered a very serious loss in the sudden death of Robert Fleetham on January 13th. He was born at North Dalton June 19th, 1859, and cradled in Methodism. He was converted March 31st, 1877, in the Wesleyan Chapel, at a Mission Service, and she who now mourns his loss was converted at the Primitive Methodist Chapel on the same evening. He joined the Primitive Methodist Church the following Sunday, hence his membership covers nearly thirty-three years.

After marriage he removed to Hull, and for five months worshipped at Hessle Road, but on account of his wife’s health returned to Wetwang. For over twenty years he has done good and acceptable service as a local preacher in this large circuit. “His great delight,” says his son, “was to come from his appointment and tell us God had been with him, and when souls were saved his joy was unbounded.” For thirty years he was a Sunday School teacher. Ten of these years he filled the office of superintendent. He was also a successful class leader, secretary of the Sunday School, secretary of the Trust, president of the C.E. Society, and choirmaster. He took special delight in the service of praise.

By his example as a total abstainer and non-smoker and a genial Christian worker he has influenced many. His philanthropic nature found expression in his efforts to collect money for Dr. Barnardo’s Homes, for Johnson’s Homes, and for our own orphanage. He has done well. He will be widely missed, and his place will be difficult to fill. Our loss is his gain. For him to be “absent from the body” was to be “present with the Lord.”

Our warmest sympathy goes out toward his widow, two sons, and three daughters (all members of our Church), who now mourn his loss. Farewell! “till the morning breaks and the shadows flee away.”