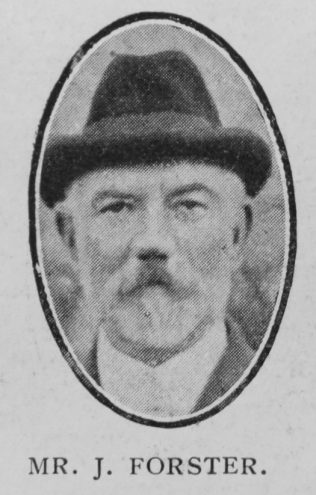 Mr. James Forster was born at Belfort, Northumberland, June 17th, 1864, and died at Annfield Plain, Co. Durham, Feb. 17th, 1912. He was converted and became a member of our Church at an early age. As a servant and official of the North Eastern Railway Company he lived at Norham and Sunilaws, within the Berwick Circuit; at Pelton, Chester-le-Street Circuit; and at Annfield Plain, Stanley Circuit. In all these places he was associated with our Church as a Local Preacher, and in other official positions.

In connection with the little church at Norham, where he lived twenty-three years, he was Society Steward and Trustee, and his house was the minister’s home. As the local stationmaster, he was known for his geniality and courtesy, his bright and cheerful presence, and fund of kindly humour. He was keenly interested in public questions, and was an ardent and active Liberal, Free Churchman and temperance reformer. In the Chester-le-Street and Stanley Circuits, amid the great population of the Durham mining district, his services as a Local Preacher were in great request. His earnestness and bright pulpit style made him a general favourite.

About a year before his death he had a serious breakdown in health, and though he was able to resume his duties as stationmaster, his recovery proved to be but temporary. The interment took place on Feb. 20th at Harelaw Cemetery. A service was held in the Annfield Plain Church, conducted by Revs. B. Dennison and J. Forster, and Mr. J. Carey, evangelist. A large number of his fellow local preachers headed the procession, in which the local Good Templars and Freemasons’ Lodges also took part. A memorial service was conducted on March 10th by Rev. B. Dennison.

James was born on 17 June 1864 at Wooler, Northumberland. I have not been able to identify his parents in online records.

He married Jane Faid (b abt1861) in the summer of 1886 in the Berwick Registration District, Northumberland. Census returns identify two children.