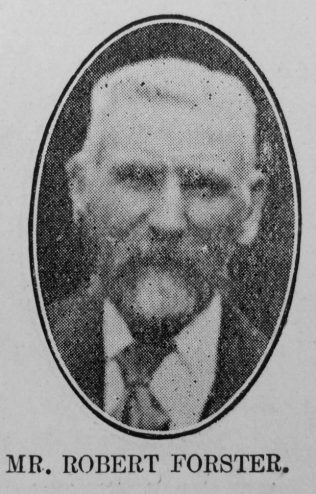 Transcription of Obituary published in the Primitive Methodist Magazine by J. Charlton

Mr. R. Forster was born at Bransdon near Flodden Field in 1851. As a schoolboy he was greatly influenced for good by Mr. Andrew Craig. Although trained as a Churchman he soon came under the spell of Methodist evangelism, and at the age of eighteen decided for Christ. Always studiously inclined he settled down to Bible reading and religious literature. From the commencement of his religious activity Mr. Forster was a soul winner. Cottage meetings, evangelistic services, and sick visiting occupied his leisure time.

At twenty-two he became a local preacher and continued for thirty-eight years. During this period he travelled long distances on foot and had much success. When at Norham he with another young man rented a room and started preaching services. A society was formed and a chapel built. On his marriage with Agnes Adams he removed to Dryburn in the Lowick Circuit, and during his residence witnessed many remarkable conversions in that neighbourhood. A revival broke out and for fourteen weeks he was not absent for a single night.

A Bible Class and Mission Band were formed, and Mr. Forster started many young men in Christian work. His home was always open to the preachers.

He removed to Allendean where for the next five years he was a very active worker.

On coming to reside in Wooler he started a Sabbath School. The cause was very low, but soon there were signs of progress and a new chapel was built, which is clear of debt.

Here, too, there was a gracious revival, and Mr. Forster was a good friend to the converts. For the last ten years he has lived at Fleetham in North Sunderland Circuit, where he rendered good service asa local preacher.

Of a humble, retiring disposition, he did not seek prominence, but his quiet influence was exerted on many individuals. He was a strong spiritual force, a sympathetic friend, a wise counsellor, a true Christian man. The crowd that gathered to his funeral was, a tribute to his far-reaching influence, and to the respect that good men bore to him. He died October 28th, aged fifty-seven years.

Robert was born in late 1850 at Branxton, Northumberland. I have not been able to identify his parents. he appears to have been brought up by grandparents James, who worked the land, and Ellen Forster.