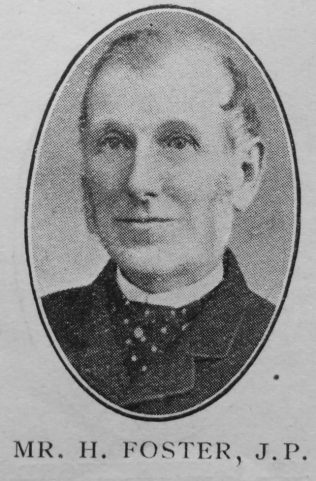 Transcription of obituary published in the Primitive Methodist Magazine by W.T.

Scunthorpe Circuit and Gunness Lane Society have suffered a serious loss by the death of Mr. Henry Foster, J.P., October 25th, 1909. He was buried beside his wife in Burringham Churchyard. Mr. Foster was a successful farmer and agriculturist. The oldest tenant on the Normanby Estate, Sir B. and Lady Sheffield held him in high esteem and affection, and on all great occasions he was a prominent figure.

Our friend was a member of the Brigg Board of Guardians for 21 years, and a vice-chairman of the Board; a county magistrate, and a school manager for 20 years.

His father’s death, when he was 11 years old, threw the cares of the farm upon him. A member of our Gunness Lane Society, he took an active part in the erection of the chapel. His home was always open to the preachers. He gave £25 towards our new Centenary Church. For many years he took our Connexional magazines.

The funeral was attended by a large assembly, including the Member of Parliament for the Division, magistrates, councillors, farmers, tradesmen and workpeople for miles around. On Sunday, Oct. 31st, Rev. W. Turner made special reference to the life, character, and death of the departed to a large and deeply-affected congregation. Mr, Foster has left five daughters and six sons to mourn his loss, for whom great sympathy is expressed.

Henry was born in 1835 at Gunness, Lincolnshire, to parents William Foster, a farmer, and Elizabeth Tune.