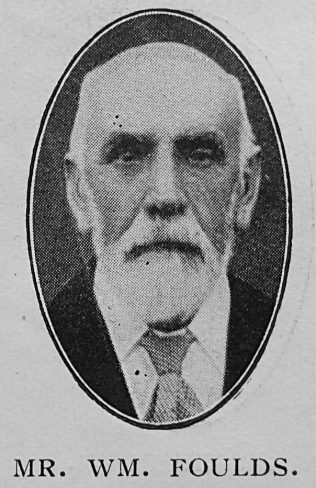 Mr. Wm. Foulds finished his earthly course on February 16th, 1910, in his 72nd year. His name was a household word in the Burnley District. He used to relate with pleasure how he preached in a small mission chapel at Colne, when W.P. Hartley, now Sir William Hartley, played the harmonium, he then being a local preacher on trial. He served in that capacity for 48 years. About 20 years ago Mr. Foulds retired from business at Burnley and took up his residence at Southport, where he became most active in religious and philanthropic work. At the time he received his home-call he was President of the Southport and District Primitive Methodist Council, and President of the High Park Local Preachers’ Mission Band. He was also Class Leader, Trustee, Sunday School teacher, and local preacher in connection with the High Park Church in the Southport 1st Circuit.

Mr. Foulds had a singularly rich personality. There was something so modest and unassuming in his bearing, something so winsome about his spirit, so elevating about his presence, that he won the esteem and love of all who came near to him. As a preacher he was always fresh and forcible. As a class leader he had a very high sense of his duty, he took great joy in visiting his members. His home life was most exemplary. His wife was his queen, her interests and pleasures always his deep concern. In friendship he was constant, in duty faithful, in sickness patient.

His mortal remains were laid to rest in the Southport Cemetery. An impressive In Memoriam service was held in our High Park Church: Representatives from the Primitive Methodist Council, and from the High Park Local Preachers’ Mission Band attended. Rev. T. Sowerby and Rev. J. Whittle conducted the service. Our friend has gone, but in memory, influence, and ministry he is still with us.

I have not been able to identify William in online census returns. Can anyone point me in thee right direction?