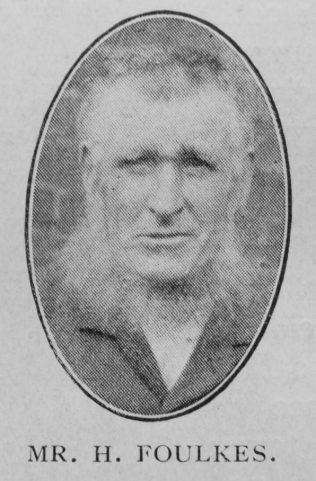 Transcription of obituary published in the Primitive Methodist Magazine by Geo. Lane

Prees Green Circuit has sustained an untold loss in the decease of Henry Foulkes, who was born at High Hatton, Salop, December 12th, 1842, and died at Shawbury, in his seventieth year, September 14th, 1912. From his early days he was the subject of strong religious inclinations and became regular in his attendance at our services, which were then held in a humble cottage. After his conversion he joined our Butler’s Bank society, where his membership continued unbroken and unstained till he was called to the higher service of heaven.

Brother Foulkes has left a splendid record. For thirty-nine years he was actively engaged in all that affected the welfare of God’s cause; the offices of society steward, Sunday School teacher, and assistant class leader sharing his time and devotion; the ordinary means of grace as well as meetings for business also having a full share of his best attention. Besides being a liberal supporter of our various funds, his was an open house for the Lord’s servants, all of whom were received as “the excellent of the earth.”

A blacksmith by trade, he knew what it was to toil for his bread in the sweat of his brow. Withal for upwards of thirty years he was painfully afflicted, rendering physical exercise, especially walking, almost intolerable. Nine months ago his affliction assumed a more serious form. He bore his distressing affliction with truest submission to the Father’s will, and he was ready when the Bridegroom came. His wife having read at his request Psalm 23, he retired, and while on his knees in the attitude of prayer the summons came. A widow, two sons and a daughter remain to mourn his loss.

Henry was born on 12 December 1842 at High Hatton, Shropshire, to parents William, a sawyer (1843), and Hannah. He was baptised in 8 January 1843 at Stanton upon Hine Heath, Shropshire.

He married Mary Preston (1845-1930) in the spring of 1868 in the Wee Registration District, Shropshire. Census returns identify three children.