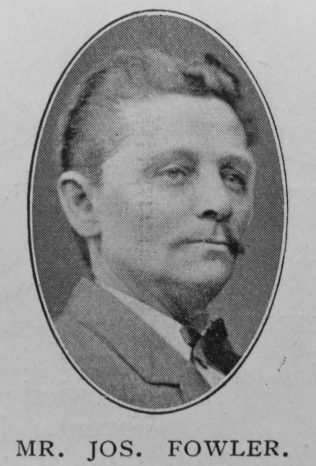 Transcription of obituary published in the Primitive Methodist Magazine by by T.B. Heward

The Chiswick Society, Richmond Circuit, has suffered a great loss in the death of Mr. Joseph Fowler, who passed peacefully away, November 28th, 1910, at the age of 67. Mr. Fowler was born at Acton, Middlesex, and was associated with our church at Chiswick over twenty years, having been assistant society steward and for many years a faithful and diligent class leader, his class-book realising a substantial sum every quarter. He was regular in attendance at the means of grace, Sunday and week-day alike.

He was direct of speech, loyal and devoted to his church. He took an active interest in open-air work. The writer visited him during his final illness and was impressed by the simplicity and strength of his faith and his consciousness of the presence of God. There was a large congregation at the funeral service, and an impressive memorial service was held December 11th, 1910.