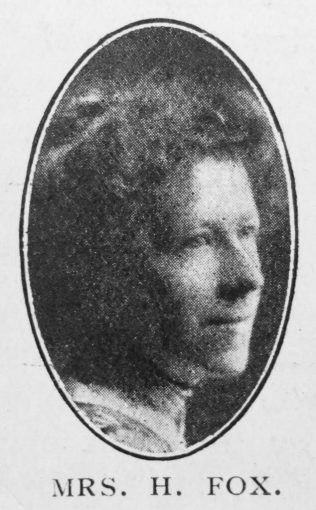 Florence Ann, the beloved wife of the Rev. Henry Fox, on Tuesday, July 16th, passed into the Great Beyond at Weston-super-Mare. Few, with the span of life stretching to thirty-three years only, have caused more to say, :I have lost a friend.” She had the kindliest spirit and there was a cheerful childlike ingenuousness that seemed to open all the windows of her heart to the day. Many could testify that her presence in the home and in the sick room was the purest benediction. She indeed was of the royal priesthood and carried. the sympathetic touch in heart, hand and voice. Her charming naturalness and sincerity of speech accompanying a transparent and fragrant Christian character gave her a distinct influence in meeting’s, both on the young and the old, whether she ministered in homely talk, or reading, or in the gift of song with which she was so happily endowed. Truly her praise is in the church of her childhood at Driffield and in all the churches with which she has been linked in the influential and effective ministry of her husband. By the obscure and rapid development of her illness the end came with unexpected suddenness, but did not find her ungirt nor unready. When the specialist’s verdict was given to her in softened words by her dear mother she quietly replied, “I am a Christian and will die like a Christian.” The end was beautifully consistent with the life. She was not, for God took her.

The interment took place in Driffield on Friday, July 19th, the service in George Street Chapel was conducted by Rev. A.R. Walsham and Rev. T. Hunter, supported by many other ministers. An “in memoriam” service was held in John Street Church, Sheffield, on Aug. 4th.

Florence was born in late 1878 at Driffield, Yorkshire, to parents Joel, a commercial traveller (1881), and Emily.