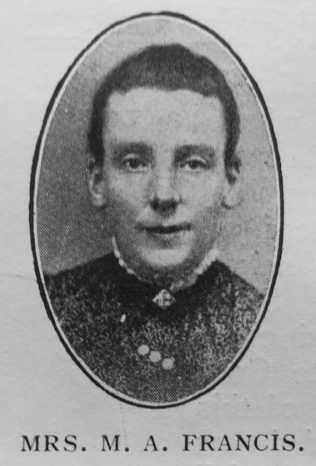 The decease of Mrs. M. A. Francis, of Bishop’s Castle, at the age of 42, robs our Church of a devoted worker of more than ordinary gifts and graces.

Our sister was the daughter of Mr, George Moss, of Reading, Deed Poll member. As a child she dedicated herself to Christ, and was early marked out for public service. In Llanymynech and Bishop’s Castle she laboured as a local preacher, engaging often, with marked success, in special mission work. Possessing a pleasant voice, a fluent style, and a winsome manner, her pulpit ministrations were always acceptable.

Our sister touched Christian work at so many points that it is difficult to specify her services to our Church, but her work as a Missionary Collector, and her devotion to the Christian Endeavour movement call for special acknowledgment.

For some years prior to her decease, Mrs. Francis was compelled, through prolonged affliction, to relinquish much of the work that was dear to her, but she accepted this trial with unfailing patience. Debarred from public service, she sought out quiet paths of usefulness in ministering to the sick and poor.

In the wider movements of our Connexional life, Mrs. Francis was deeply interested. She collected diligently for the Centenary Fund, adding an acceptable gift of her own, which she placed in her children’s names.

Our hope that the shadows would lift from our friend’s life was destined not to be realised. In June, 1910, her condition became critical, and on the 15th the flickering light suddenly expired. At the funeral and the subsequent memorial service the high regard in which our friend was held was abundantly manifest. To the sorrowing husband and children our heartfelt sympathy goes out, but for our sister we do not grieve, for we know that she has gone to be for ever with the Lord.

Martha was born abt1868 at Reading, Berkshire, to parents George Montague Moss, a barge builder and PM local preacher (1871), and Ellen Cornish.

She married Richard Walker Francis (1866-1954), a butcher, in the summer of 1887 in the Clun Registration District, Shropshire. Census returns identify nine children.