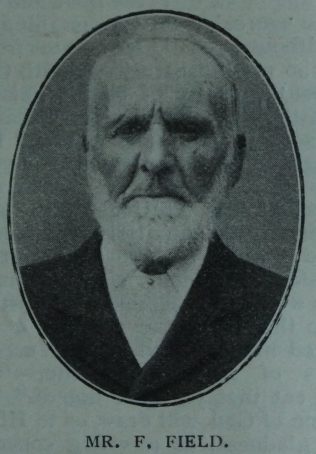 Transcription of ‘Sketch’ in the Christian Messenger by Rev. R.W. Keightley in the “Rough Diamonds I have Met” series

For the “diamonds” previously noticed the mines of North Lincolnshire have been responsible. But precedence does not imply scarcity, much less inferiority, of mines and diamonds in other counties. The three Ridings  of York are exceedingly rich in moral gems.

Yorkshire “character” is known the world over, and the type is all the more pronounced and valuable when associated with Methodist religious life. Possibly no county has produced more conspicuous and outstanding personalities than York. To go no further than the East Riding, we have had John Oxtoby, Michael Gibson, Peter Jackson, Charles Bowman, and hosts of others who have been prominent figures in our own Church. Rough they were, but gems of the first water. They have been polished, and are now among the King’s jewels.

Mr. Field settled in Cottingham more than fifty-five years ago, and he is now over seventy-five years of age. He has been a member of our Church from boyhood. He has been a class leader forty-six years, school superintendent thirty-four years, leading singer and choir-master thirty years, and he and Mr. G Tranmer, another worthy still living, were the society stewards during a very long period. He signed the temperance pledge when seventeen years old, and since that time he has not, to use his own expression, “drunk as much intoxicating drink as would blind a midge.”

In business Mr. Field unites the vocations of market-gardener and pork-butcher. He has “stood” the Hull Market on Saturday nights for more than fifty years, and could not reach home until about midnight. Notwithstanding a strenuous life and much exposure, he is comparatively hale and strong for his years. He has reared a considerable family, and our Church is all the better for their devotion and labour.

My first glimpse of the rugged and racy humour of the man came in a quarterly meeting twenty-eight years ago. The “trial sermon” of a candidate for the local preachers plan was under discussion. The trend of the conversation was that, with our large chapels and intelligent congregations, the quality of the preachers was of more moment than their number, and there was an evident disposition to keep the candidate back. As no local preacher was present from Cottingham, our friend asked to say a word. The privilege was accorded, whereupon he said, “We hear a lot more local preachers at Cottingham than you do i’Hull, and we like this brother a lot better than we like some o’these men who hev so much fau’t to find wi’him.” The vote was taken, and the “trial sermon” was adjudged to be satisfactory.

Preachers who had a message, and were willing to deliver it in a natural and common-sense way, had no better hearer than the “leading singer.” But if a man put on airs, and attempted to be other than he was, he might expect a candid criticism. He has been heard to say that “in the first five minutes of a sermon he could tell whether there was owt worth keeping wakken for.” A brother, who has now gone to the saints’ rest and reward, had a rather bombastic pulpit manner and style, his language was of the flamboyant order, and his bearing was very full of “dignity.” Our candid friend was asked one day if he did not consider the aforesaid a very deep preacher. “He seems to go doon a lang way, but I can’t see that he brings owt up but muck,” was his gentle reply.

Until recent years the first service of the Sabbath was held at 2 p.m., and, owing to the long distance, many of the members resided from the chapel, two of the society classes met at the close of afternoon worship. In consequence of that arrangement, one hour only was allowed for the public service. In ignorance or forgetfulness of that law, a brother devoted considerable time to the exposition of the lesson, and at five minutes to three was calmly announcing the divisions of his  sermon, when our friend in the corner of the singers; pew said, “You’ll be like to keep them awhile you come again, as we always shut up at three o’clock.”

Ministers were no more immune from his criticisms than were laymen. We had a distinguished missionary deputation, who preached at Cottingham on a November Sunday afternoon. The sermon was full of instruction, but by the average man it would be described as “dry.” On the following Tuesday a lay preacher, reckoned to be also prosy and dry, was asking Mr. Field how the missionary deputation had got on? To which enquiry he made answer, “as near as I can say he was as dry as you are when you come.” But none could be vexed with him. His sparkling eyes, laughing face, and merry voice took the sting and bitterness out of the verdicts he so readily delivered. His criticisms were more pleasant than some men’s commendations.

It fell to my lot to conduct more than one or two evangelistic missions at Cottingham, and with some measure of success. But in missions there is much repairing, as well as new work to be done. Seeing a few people come forward whom I thought had been in evidence in previous missions, I ventured to ask Mr. Field if we had not had them before? “Aye” said he, “but they are vary useful, they give us a start!” There was philosophy as well as humour in the reply. In a mission one of the greatest difficulties is often to get “a start.”

The shadows of the evening are gathering about our brother. He has done good work of many kinds. Providence has been bountiful to him in natural gifts and disposition, in material good, and social blessings, and divine grace is making him meet for higher and more perfect service beyond the veil. May his eventide be full of light, peace and hope.

Francis was born on 14 April 1831 at Bainton, Yorkshire, to parents Elijah and Elizabeth. His birth was recorded in the Great Driffield Baptist Records.