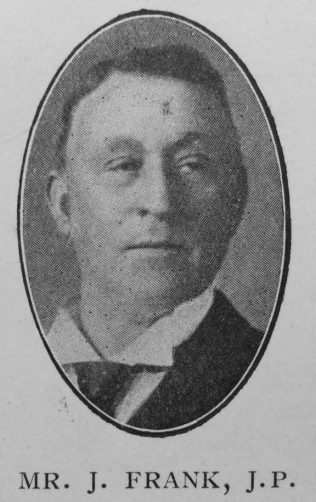 The town of Pickering has seldom seen so wide an expression of grief as when Mr. John Frank, J.P., passed away.

Mr. Frank started life with little besides his own native ambition and ability; but these were assets of unusual worth. He made his way to wealth and position. His generous nature flowed forth along every practicable avenue of service. After his first election, he was always at the top of the poll for the Guardians, and either there or in the second place for the District Council, of which he was chairman. Repeatedly he was urged to stand for the division as a candidate for Parliament.

Intensely a Primitive Methodist, he supported all the churches financially, and for about forty years annually took the chair at the Wesleyan Chapel Anniversary. If Liberalism is strong in Pickering, it is largely due to his example and lead. He rapidly formed a judgment on any question, and expressed it with force, but he was a gentle soul and considerate of others. As age crept on he evoked a remarkable measure of affection and general esteem.

He was a local preacher, class leader, a member of each trust on the circuit, and for many years the circuit steward. He put a lot of work into the circuit, and freely gave money for every good object. In all his devotion to Primitive Methodism, he was unreservedly supported by Mrs. Frank, who survives him.

He died on Friday, June 3rd, and on the following Monday sympathising friends from a wide area gathered to honour the memory of the fallen warrior, Revs. T. Graham, I. Cousin, J. Reavley, G. F. Fawcett, and J. Phillips taking part in the service. The remains were interred in the Pickering Cemetery. On the following Sunday evening a memorial service was conducted by Rev. T. Graham in the Pickering Chapel, when tribute was borne to Mr. Frank’s life and service.

John was born in 1837 at Pickering, Yorkshire, to parents William Johnson Frank, a farmer, and Sarah Wilson. He was baptised on 15 November 1835 at Pickering.

He married Mary Ann Wilson (abt1846-1932) in the spring of 1863 in the Scarborough Registration District, Yorkshire. Census returns identify two children.