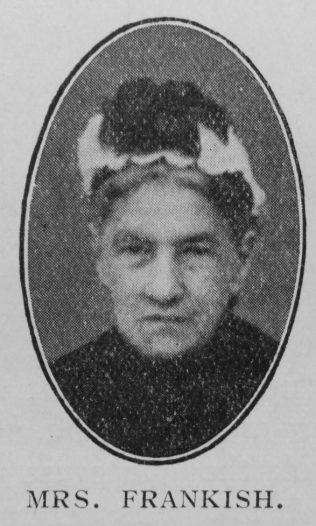 Mrs. Frankish, who departed this life at Grasby, in the Market Rasen Station, was brought into the Spiritual Kingdom many years ago, through the instrumentality of a mighty evangelist known as “Sally Moody.” The genuineness of her conversion was proved by her subsequent life. Her association with our Church from the time of her spiritual change to her death was of great service. She was very regular in her attendance at the various means of grace, and in this respect has left a fine example to the young people connected with our churches and congregations.

Her character and reputation have been of unmeasured value to true religion, for both saint and sinner respected spiritual things the more because the best in the Christian religion was shown in her life. Her generosity was exceptional. Although her material possessions were not large, she is believed to have been one of the largest givers to the funds of our Church in her neighbourhood. In public prayer she was indeed gifted, and many times in this way has been instrumental in lifting the meetings to great triumph.

Her last affliction was but brief but was so prolonged as to give her opportunity of witness-bearing to the sweetness and power of the Christian religion. The writer had the high privilege of being in her room a few hours before she died, and can testify to the real power of Christian things as seen in her case. She has left a number of relatives, who deeply mourn her departure, and there are large numbers outside her family who miss her helpful presence and words, and we believe both relatives and friends will look onward to the time of reunion in the midst of the paradise of God.