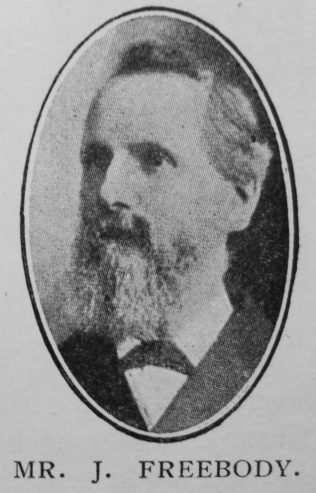 Transcription of obituary published in the Primitive Methodist Magazine by T.C.

By the death of John Freebody, July 19th, 1910, the Reading Circuit lost one of its most prominent and energetic workers. He was born September 4th, 1847, of humble parentage, had scant education—only three weeks’ schooling— and, at the age of eight years began work. His home life was not friendly to piety, but while yet a youth he was led to the old Primitive Methodist Chapel in Salem Yard, Minster Street, where he soon found “the pearl of great price,” and became a member of the Church.

Notwithstanding his lack of education, he soon became an accredited local preacher, and with commendable zeal for forty-seven years preached the gospel in the villages around. He was very successful, and became unusually popular, especially with camp meetings and open-air services — his labours in later years extending to Wallingford, Newbury, Swindon, Southall, and other distant places. He was an efficient class leader, full of the old-time fire and enthusiasm. He was also a valuable member of the Reading Temperance Society, and took a large share in the advocacy of temperance principles in the adjacent villages. His career was a beautiful illustration of what may be accomplished in the humbler walks of life, by limited abilities consecrated to the highest and noblest ends.

The funeral was largely attended by friends and representatives of different societies in the town. His was a brave and useful life that won the respect and affection of all who knew him. The fragrance of his life and character will long abide.