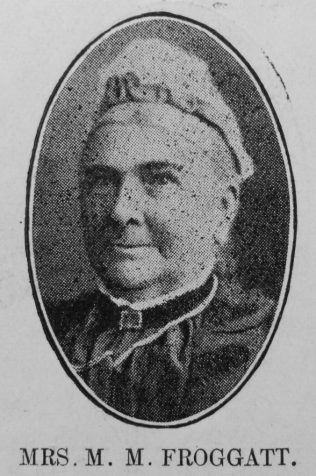 Mrs. Froggatt, the beloved wife of Mr. Thomas Froggatt, of Featherknowl Farm, Ludlow Circuit, was born at Bagley, Ellesmere, in the year 1833. She joined the Bagley Society when young, and for years was useful as a Sunday School teacher. In June, 1859, she was united in marriage to Mr. Thomas Froggatt. For years our people worshipped under their roof. The best room in the house was made a sanctuary, and the best bedroom used as the prophet’s chamber. The services in the farm-house chapel (the singing always led by the master himself) were an inspiration. Mrs. Froggatt’s considerateness for the comfort of the ministers was a benediction. She joined her husband in every good work and how much she helped him in his business none can tell. In the erection of the present chapel at Ashford she was warmly interested.

Removing to Featherknowl upon the death of the senior Froggatts of precious memory, Mrs. Froggatt kept up her interest in Primitive Methodism. Many of the ministers will gratefully remember her unstinted kindness.

For over three years she was partially disabled by affliction. Smitten with paralysis her strong constitution reluctantly gave way. Even with shattered nerves and agitated brain she held to her post. Her quiet hours were beguiled with knitting and reading. The once busy mother and housewife could often be seen with her book. She loved the Connexional magazines and looked eagerly for their coming. She gradually weakened down until Monday, January 18th, 1909. Then as the sun went down her spirit rose to the brightness of eternal day.

On Thursday, the 21st, at Ashford Carbonal her body was laid near the resting place of three of her children. Her husband is left to travel slowly on to the gate of reunion. Her children can only wish that when their earthly journey ends they may be as well prepared for the heavenly rest as their devoted mother. The writer submits this as a small tribute of respect to the memory of a good woman so kind to him during thirty-six years’ acquaintance, especially so in the earlier years of his ministry.

Mary was born in 1832 at Bagley, Ellesmere, Shropshire, to parents Thomas, a farmer, and Jane. She was baptised on 22 October 1832 at Hordley, Shropshire.

She married Thomas Froggatt (1835-1909), a farmer, in June 1959 in the Ellesmere Registration District. Mary passed away three weeks before her husband. Census returns identify six children.