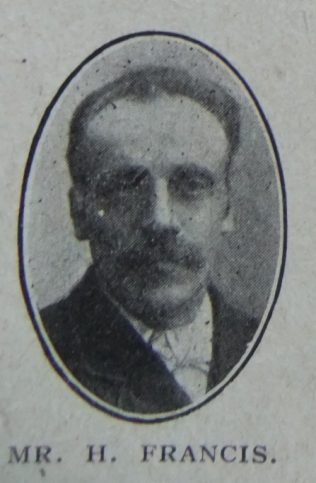 He attended the New Street Mission Sunday school, where he was converted at the age of seventeen. Later he became associated with our Warham Street Church. He has been one of the foremost of our South-West London local preachers, his services being in constant demand. Being a life-long abstainer and a non-smoker, he was frequently engaged in temperance work. Whenever he was free on the Sunday he was found with his children in the pew. In his passing the South West London Preachers Association has lost one of its best supporters. Eight children survive along with Mrs. Francis to mourn his loss. Much sympathy has been expressed to Mrs Francis in the great struggle that lies in front of her. Two of the children were recommended for the Stockwell Orphanage and have been admitted. Rev. W. G. Coad paid a fine tribute to the character of Mr. H. Francis, the funeral service being conducted by Rev. M. Featherstone.

Census returns suggest Henry was born at Poplar rather than Lambeth as reported in the obituary. His parents were Henry and Elizabeth. In 1871, Henry, senior, worked as a mason’s labourer.

Henry married Elizabeth Gorbutt (b1868) in the summer of 1898 at Lambeth. Census returns identify four children.

Henry worked as a house painter for most of his working life. The 1871 census shows him working as an errand boy.