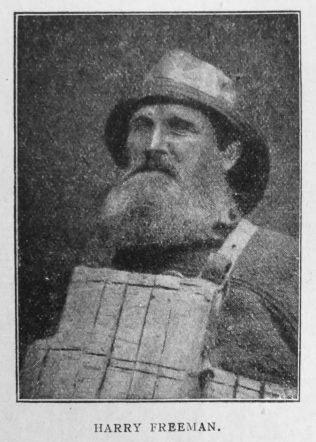 Transcription of ‘Sketch’ In the Christian Messenger by Rev. F.R. Brunskill

THE Gods love and bless the brave! And so do the common people. The heroic deeds of our seamen inspire world-wide gratitude and praise. We live in days of the triumphs of the brave heart, and not least among the homes of our sailors is old Whitby. Many thrilling stories have been told of its heroic spirits who have braved the most awful seas to save the shipwrecked sufferers. The little town has also sent its full complement of sons to the sea and also to the battlefield. The very atmosphere of the old-world place gives the feeling for adventure and fearless endeavour in the noblest enterprises of the sea. It is the birthplace of English song, of romance, of dreams, and of navigators, like Captain Cook. And not least among its heroes was Harry Freeman, who for nearly forty years was coxswain of Whitby‘s lifeboats.

He was born at Bridlington in April, 1835, and served an apprenticeship as a brick and tile maker. In 1855 he settled in Whitby, with the purpose of following his trade; but the sea laid hold of his heart, and before he had much experience of its terrors, he joined the lifeboat crew and immediately became one of its most heroic members. He became coxswain in 1861, which position he held until his retirement in 1899. During those years he shared with his mates the honour of saving over three hundred lives. Few seamen have passed through such dangers as Harry Freeman, and the memory of his valour will live on in the hearts of successive generations of Whitby.

He was over six feet in height, and the possessor of a very strong physical frame. Within his powerful body he carried a brave heart. It was his pride to face the worst conditions if only the perishing could be rescued. His picturesque personality, heightened by the familiar sou’wester, guernsey and high-topped boots, was as free as the wind and rollicking as a schoolboy’s; and whatsoever pride he may have had in life, it was founded on deeds that were worthy to be recited and sung for all time.

During the years he was Coxswain (1861-99), he and his mates laboured in the following lifeboats, and were successful in saving the lives of great numbers who must otherwise have perished.

The first lifeboat was Lucy, by which they saved seventy-one; then Robert Whitworth, one hundred and thirty-nine; Harriett Forteath, thirty-four; the same named boat, but the second and third in order, twenty-eight and five. These were succeeded by Robert and Mary Ellis, twenty-three; then John Fielden, four. Two of the greatest storms ever recorded in the annals of Whitby lifeboatmen were in 1861 and 1881. The fury of the sea was unparalleled. In the first case Harry Freeman had a marvellous escape. He was the only survivor of all the boat’s crew. In the second instance the call was to go to the rescue of the wrecked brig, the Visitor, at Robin Hood’s Bay. It was impossible to row the lifeboat to the bay in such a tempestuous sea, and so the men took it by road through deep snow, and were in time to rescue the crew of the wrecked vessel. Many other daring exploits belong to his life-story. He spent his life saving life.

He was a seatholder in our Church Street Chapel, and a trustee of the new premises. His wife—Mrs. Freeman—is still with us. She is one of the consistent and truly devout members of our Church, and has been for years.

Henry was baptised on 3 May 1835 at Bridlington, Yorkshire. His parents were William, a brickmaker, and Margaret.

On moving to Whitby, Henry earned his living as a fisherman. He married Elizabeth Busfield (1835-1898) in late 1861 at Whitby, Yorkshire.

Henry’s death was registered at Whitby in late 1904.