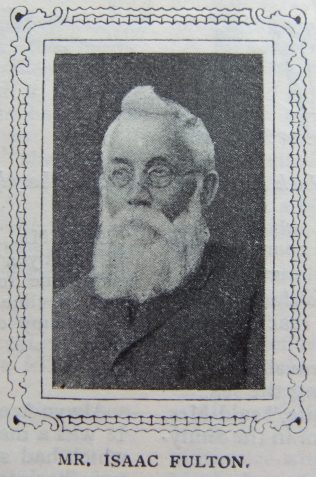 Mr. Isaac Fulton is one of those men who, in a quiet, unostentatious way has rendered most efficient service to Primitive Methodism, having been a member of the Church over fifty-one years. He was born at Paston, Northumberland, in the year 1840, and for some years attended the services of the Presbyterian church with which the family was associated. His conversion took place when he was sixteen years of age in a little Primitive Methodist chapel at Millfield, which was then in the Berwick Circuit. In the year 1859 he removed to Philadelphia, in the County of Durham, where he at once allied himself with our Church and where he has rendered loyal and devoted service. He was leader of one class for the long period of forty years and in this capacity gave wise counsel and sound instruction, often inspiring an optimistic spirit in the midst of dark and trying experiences.

He has been a Sunday school teacher for fifty years, and has received a Diploma from the Connexional Sunday School Union as recognition of his long term of service. For twenty –two years he was Treasurer of the chapel, and for twenty-eight years collected for the Missionary Fund, being styled the “Missionary Barber,” as the proceeds of this work were devoted to the cause of Missions. His home, for years, has been an open one for the preachers, it being a great delight to him and his good wife to entertain the messengers of truth. He has a strong, vigorous mind, has a firm grip of the Gospel, and has great delight in listening to the exposition of God’s Word. He is deeply spiritual, has a good insight into Divine things, and has love for the means of grace. He knows the way to the throne of grace and loves communion with the Divine.

Isaac was born in 1840 at Kirknewton, Northumberland, to parents Robert and Jane. Robert worked the land.

Isaac worked as a blacksmith.

Isaac died in early 1923 in the Houghton-le-Spring Registration District.