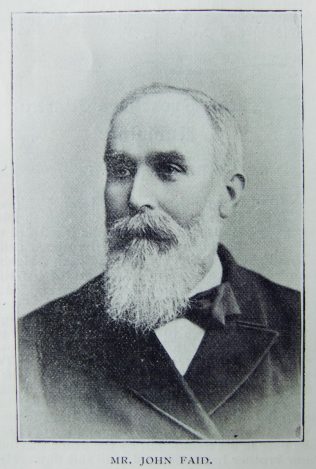 Transcription of Sketch in the Christian Messenger by F.J. Sainty in the series ‘Local Preachers Worth Knowing’

All who know Mr. John Faid, of Greenock, in the North British District, will agree that he is entitled to be included under the above title. Mr. Faid was born in 1841, at South Shields, a place where the critical events of his life occurred, and for which he has ever retained a warm regard. We have heard him advising young men to copy his example in three things which he believes to have been the cause of his prosperity, both in body and soul, viz:- (1) To sign the temperance pledge. (2) To give God the heart.  (3) To marry a good wife. He signed the pledge in 1854 when thirteen years of age, and has kept it ever since. The year following he was converted in the Templetown Chapel. His father declared it would all be over in six weeks, but by the grace of God our brother has continued until this day. He at once united with our Church, and when sixteen years of age began the work of a local preacher as a ‘star’ with Mr. Matthew Hall. The South Shields Circuit then included what is now the Jarrow-on-Tyne Circuit, and involved considerable bodily labour. But our friend remembers those early days of service with great joy. Often did sinners cry for mercy, often were the preachers used to point sinners to the Saviour.

In 1862, Mr. Faid was proposed as a candidate for the ministry, but his father objecting, the proposal fell through. About this time he entered the Civil Service, in which he has risen to the position of an examining officer of Customs.

When the Laygate Chapel superseded the old Templetown Chapel in 1882, Mr. Faid became one of the trustees, an office which he still holds. He was an active worker in the Sunday School, in which he had been successively scholar, secretary and superintendent, while for years he fulfilled the duties of secretary to the Circuit S.S. Union. It was with general regret and with many tokens of esteem that the Laygate friends parted with him and his wife on their removal to Greenock in 1883. But Laygate’s loss was Greenock’s gain, which the latter was not slow to discover. What the Greenock Station (which is a pastorate) would have been to-day but for his faithful self-sacrificing support, none can tell, and only they who know the vicissitudes and struggles of the last seventeen years can conceive. In days of dark discouragement, he has bravely held on, always believing that a brighter day was coming, and no one is more rejoiced than he that, in the providence of God, a new day of hope has dawned for the station. He holds the offices of local preacher, class-leader, society steward and chapel steward. Whoever is absent, Bro. Faid is always at his post, Sunday and week-day, except when absolutely unable. In a pastorate there are not such frequent opportunities for local preachers as in a circuit, but as occasion offers, our brother proclaims a free salvation in his own happy style. And he is not out of place in any religious service. Class-meeting, open-air services, prayer-meeting, all are a delight to him, and to each he gives his best energies.

For many years Mr. Faid has been a conspicuous member of the North British District Meeting, which would sorely miss him. No brother is more highly respected, nor are the counsels of any delegate more highly valued. The district has twice honoured him by sending him to Conference, and he has creditably sustained the position.

He believes in Primitive Methodism, he loves its history, and he often grows radiant as he tells of Thomas Addy, Thomas Atkinson, Anthony Young (his ?rst class-leader), Willie Waugh, Thomas Davison, and other South Shield worthies of the past generation, or of the Revs. Henry Hebbron, Peter Clarke, and Thomas Brodie.

There has been more sunshine than shadow in our brother’s life. ‘The lines have fallen unto him in pleasant places.’ To use his own words, he has lived on the sunny side of the street; both temporally and spiritually be he has had little cause for anxiety. His family life has been all that could be desired. He attributes a large share of his happiness to his wife, who, also a native of ‘canny Shields,’ and converted in the same chapel as her husband, has never failed to second him in every good enterprise. Her home is ever open to the servants of God, particularly those connected with our own Church. Their six living children, two of whom are married to Christian partners, are all on the way to heaven, while the eldest son, Mr. Robert Faid, is the precentor of the Church and the assistant superintendent of the school at Greenock.

May Heaven richly bless our friend’s latter years, until, pursued by goodness and mercy all the days of his life, he shall dwell in the house of the Lord for ever.

John was born in 1841 at South Shields, Co.Durham, to parents Robert and Jane. Robert was a labourer.