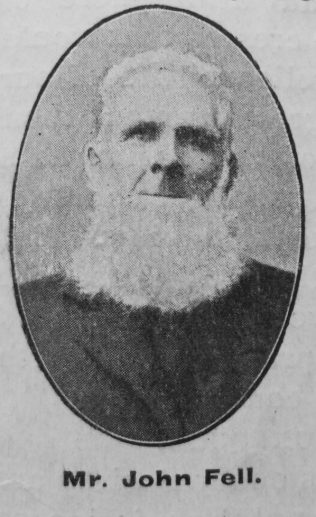 Transcription of Obituary in the Primitive Methodist Magazine by W.L. Spooner

Mr. Fell, elder brother of Rev. B. Fell, was born at Kilpin, near Howden, Yorkshire, August 14th, 1837, and entered the atmosphere of a Christian home. This unreckonable privilege did much in the unfolding and ultimate shaping of our brother’s course. He started to preach when about fourteen or fifteen years of age. Special experience was his, and with the true instinct of power possessed, he responded to the call of God and the Church to take out his soul to other souls, that he might sway them to life’s Divine paths. For fifty-one years he continuously, and for the greater part of that time, laboriously served the Connexion as a local preacher. Over fairly well the whole ground of what was the original Swinefleet Circuit our brother used to travel to his appointments. But he tramped in cheerfulness and preached with great acceptability. Intellectually he was a man by himself. He had keen perception of the quaint, and great delight in it. He was fond of out-of-the-way texts, and usually awakened much interest in his handling of them. No doubt our mentors in homiletics would condemn the habit of our brother in selecting such texts. But it is possible to destroy the effect of a God-intended individuality by demanding a too rigid deference to homiletical canons. Just a sample of the texts used by our late brother will make clear a bent in his mind. “And the bowls and the snuffers and the basins and the spoons,” Kings, 7-50. “The text suggests three things. 1. The bowls suggest washing. We must be washed and washed personally, washed every day. II. The snuflers remind us we must keep on clear light. To keep a clear light we must be pure, and must be filled with the Holy Ghost. III. The basins and spoons suggest food. We must be fed by 1. Private. 2. Public means of grace. 3. By Communion with God.” Of course many other texts of a different order were employed, but he tended in the quaint direction, and his congregations usually expected something out of the common run.

It was a joy to our brother to preach, and his practical words through the half century must have wrought some uplifting in many, many lives. His circumstances through family affliction have often been trying, and a “drag” on his religious actions. In recent years, however, social comfort has been more fully experienced.

More than twelve months before his decease, a subtle internal physical trouble developed, and although he hoped against hope that he would master the bodily foe, that foe by slow yet sure stages conquered him. Through the whole tedious ordeal he endured bravely. No word of discontent was spoken, no murmur against circumstances, but a steady, trustful, and hopeful testimony to the Divine care, marked the whole course of his slow decay. A certain reticence always characterized him, even when he spoke of his religious life, but there was no hesitancy in his word. His earthly, almost iron house, slowly dissolved, but he knew he had “a building of God” going up; and when the outer house was dropped the spiritual dwelling was realised, and he was at home with God. This glorious transition was made on July 30th, 1903.

Respect for our brother was shown by a considerable number of local preachers and other officials from Howden and elsewhere attending his funeral. The earlier part of the burial service took place in the schoolroom of our Carlisle Terrace Church, and a very appreciative and suitable address was given by the Rev. N. Jefferson, of Hull, who also later on committed the body to its cemetery rest.

May the widow, who during the years of marriage to our brother has proved a real helpmeet, and who has had a long strain of nursing and care, and the family, be consoled and supported by the love of God our Father, the grace of Christ our Lord, and the inspiration of the Holy Spirit. And may all rejoin the husband, father, friend, in the home where it is Everlasting Light.

John was born to parents Benjamin Fell, an agricultural labourer and later a shopkeeper, and Sarah Nicholson.

After initially working the land, John earned his living as a bricklayer.

He married Sarah Elizabeth Leaf (1835-1892) in the spring of 1859 in the Howden Registration District, Yorkshire. Census returns identify six children.