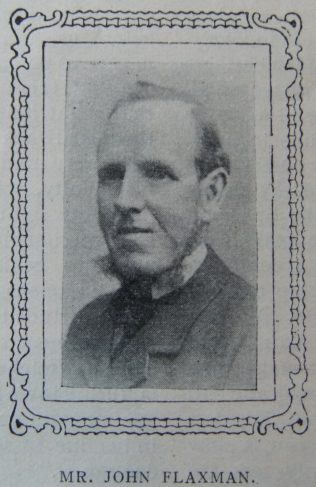 John Flaxman is not only an active worker in Primitive Methodism to-day, but he forms an interesting link with the past. His name has been on the Class book since he was born in 1844. His father’s home was it resting place for many of our early preachers. Services were often held there. One memory that he delights to recall is that of a visit from the venerable Hugh Bourne. Both his parents were members for nearly seventy years.

He removed from his native village of Little Missenden, in the High Wycombe Circuit, when twenty-two years of age. First coming to Mitcham, he afterwards settled at Kennington in 1872. For over thirty years he has rendered devoted service as Society steward at Warham Street, Kennington Park. During the same length of time he has also acted as Treasurer of the Trustees. He has a good record of faithful and valuable service in both these offices.

As a steward he is unfailing in the discharge of his duties. He gives himself with zeal to all that he believes will benefit his church. He unites a genuine interest in both its financial and spiritual welfare. He brings to his work a warm heart and a rigid purpose. Through many difficult days has he toiled, and it has often been through no little personal sacrifice that he has continued the work he loves. He has a high ideal of Christian duty, is strongly devoted to his church, and is proud of the name of Primitive Methodist. His intense spirituality and unswerving loyalty qualify him for an honoured place among those who have toiled for Primitive Methodism and Jesus Christ in the metropolis.

Three sons are members also at Kennington Park. One of these has for some time been assistant in office with his father.

John was born in 1844 to parents William and Hannah. William worked the land.