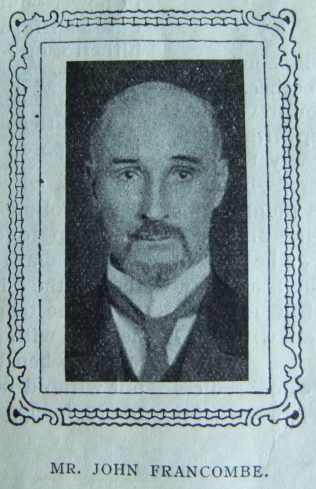 MR. JOHN FRANCOMBE was born of religious parents July 30th, 1853, at Kingswood, near Bristol. In 1859, owing to irregular and unremunerative toil his parents removed from Kingswood to Easington Lane in Durham. Here his mother died, leaving five children, of whom John was the oldest at fifteen years. At the age of eight he descended the mine, and a year later became a member of our church.

Educational facilities in those times were not what they are to-day, but despite limitations of this nature he acquired more than average intelligence, which knowledge was consecrated to the highest ends.

In the year 1870 he came to reside in the town of Houghton-le-Spring, and in the interval the church has called him to fill many official positions, which he has done with credit to himself and benefit to the community.

At the September Quarterly of 1877 he was examined for the plan by the late Rev. James Boulton, his initials appearing the following quarter. His present position is number four. As a preacher he has rendered good service, and still does a little as strength will permit. In 1876 an accident befell him in the mine which shattered his nervous system, from the effects of this he still suffers.

In 1875 he was married by the late Rev. Adam Dodds to Miss Margaret Simpson daughter of John and Mary Simpson, distinguished for their piety and activity in every good cause. Mr. and Mrs. Francombe’s family consist of four daughters and two sons, one of whom is Rev. J. Simpson Francombe, now of Truro and Falmouth.

We wish for our brother, his wife and family many more years of Christian service.

John was born at Kingswood, Bristol, Gloucestershire, to parents Joseph and Fanny. Joseph was a coal miner, although the 1871 census return describes him as a tea dealer.

John was a coal miner, although the 1891 census return describes his occupation as Singer sewing machine agent.

John married Susannah Simpson (abt1854-1917) in the spring of 1875 at Houghton-le-Spring, Co. Durham. Census returns identify seven of nine children.