A Jubilee of Preaching 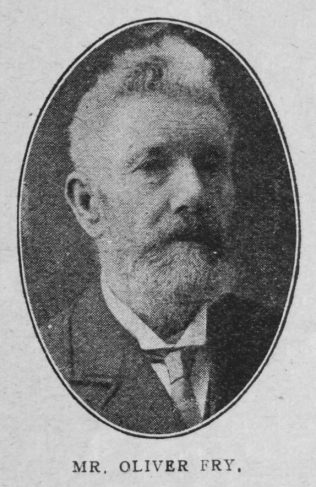 Transcription of Sketch In the Christian Messenger by W. Bramwell Hill

OLIVER FRY, of Swindon First Circuit has been a local preacher for fifty-two years. The name of Fry at Swindon is very largely associated with things that provide an alliteration, printing and provision, preaching and Primitive Methodism. Allied in a blend of Christian character the latter are held as the more important. Consequently, to write concerning this family of note is a privilege and a pleasure.

It is about the respected father, however, that this sketch is concerned. Born at Foxley, a little Wiltshire village near the ancient town of Malmesbury, in 1847, it was in the circuit bearing the latter name that our friend first became acquainted with Primitive Methodism. After his conversion, in his early youth, he associated himself with our church at Malmesbury, and at the age of about eighteen, he actively took part in public worship for the first time. This beginning was made in Startley Chapel. When he first began to go out to appointments, his mother is reputed to have essayed the prophecy: “They Methodists ‘ull take every penny you get and you’ll wear all your boot leather out walking about for ‘em.” Needless to say that her Anglicanism had failed to appreciate the sacrificial challenge peculiar to the genius of Primitive Methodism. The prophecy has only been fulfilled in part, truly many boots have been worn out in serving the church. He believes in systematic giving, and has always had a place for what he has been known to term “the Lord’s portion.” The pulpit is his throne; he glories in preaching. He is a preacher of note, beloved by his brethren and highly respected for his upright and sterling integrity. He stands for the virile and ringing presentation of evangelical truth, keeping touch with its verities, yet not forgetting its modern application. Though the story of the years lengthens out his inward man is marvellously renewed day by day. This in spite of the fact that physical weakness laid him low as the result of an accident to his leg. We are glad to my that he has recovered sufficiently to enable him to carry on the work he loves, for he preaches still with much of his former vigour and ability. The surrounding circuits of Malmesbury, Brinkworth, Hungerford, and Farringdon have shared his services throughout the years, as many a minister will testify. His list of engagements, quarter by quarter, would amaze and shame many a younger man. His own circuit is justly proud of him. He has been a bulwark of our Cricklade Road Church, having been identified with it ever since coming to Swindon. As Trustee, Chapel Steward, Society Steward, Sunday school superintendent, Class Leader and Local Preacher, he has laboured hard and has given his best to the Church. In circuit life he has been Circuit Steward, and is a member of the District Committee. He has represented his circuit and the Committee in the Synod.

His eldest son is well known as a printer, and in church life he has a fine record as organist at Cricklade Road for thirty-five years. The members of this church have recently shown their appreciation of work by presenting him with a marble clock and a conductor’s baton. Mr. Fry’s only daughter is the wife of Mr. H. Watkins, J.P., whose public service and preaching ability are well known. The youngest son, Mr. Fred O. Fry, is associated with his father in the business. He, too, takes his place, as a thoughtful and able preacher, among the younger men of Swindon First Circuit. Mrs. F. Fry is a daughter of Mr. Joseph Stratford, a name fragrant with hallowed associations.

Oliver Fry has been twice married. The former Mrs. Fry passed away in 1880. The present union has been singularly happy, and the presence of the wife in the home has its own ministry of quiet helpfulness. Two books stand out in the library of Oliver Fry. The Book of Books is well known to him, and he can quote it aptly and appropriately. The Book of Observation is studied by him most closely.

Oliver was born abt 1845 at Foxley, Wiltshire, to parents Charles and Elizabeth. Charles was a farm labourer.

Oliver married Esther Ayliffe (1841-1883) in the spring of 1871 in the Malmesbury Registration District, Wiltshire. Census returns identify one child.

Oliver married Jane Roach, nee Leighfield (abt1847-1933) in the summer of 1883 in the Highworth Registration District, Wiltshire. Census returns identify one child.