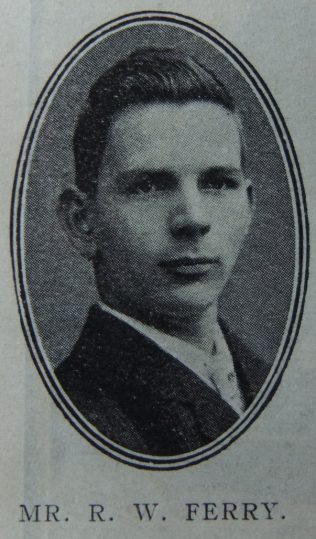 THORNLEY Circuit and Wheatley Hill Society have lost a promising young worker in Robert W. Ferry, who was accidentally killed by the overturning of a crane at Thornley Colliery on May 17. Our late brother was born at Quarrington Hill on July 24, 1884, and was a member of our church about fourteen years. For seven years he was a local preacher and an active worker in the Sunday-school and Christian Endeavour. Of a quiet, unassuming disposition, he was clearly loved by all.

The funeral service, conducted by the Rev. Gelley and T. Dale, was the largest ever seen in Wheatley Hill. Mr. Ferry had been married only ten months, and leaves a widow and a baby boy. His father, Edward Ferry is well known as a local preacher throughout the district.

Robert was the son of Edward and Mary Elizabeth Ferry. Edward was a coal miner.

Robert trained as a joiner.