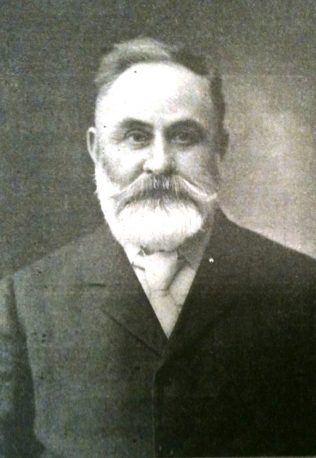 Born at Talk o’ th’ Hill, Samuel started work at the age of seven, helping his father at the coke ovens and in the brickfields. At the age of 10 he began to work on the pit bank at Talke Colliery, and was only 12 when he started work down the mine.

A lifelong Primitive Methodist, at the age of 20 he was ‘put on the plan’ by Rev Maurice Nicholas. As well as being a local preacher, he became a Sunday School teacher, class leader, and sick visitor.  At the age of 24 he considered entering the ministry, but ‘circumstances were not favourable’.

In 1881 his fellow miners at Jamage Colliery elected him check weighman, and seven years later he was elected president of the North Staffordshire Miners’ Federation, a position he held for 24 years.

1893 he moved to Burslem to help Enoch Edwards MP in his work as agent and secretary for the North Staffs Miners’ Federation. Previously, in 1888, Finney and Edwards had worked together to lay the foundations of the Miners’ National Federation, and both were at the meeting in Newport, Monmouthshire when the first rules and constitution of the Federation were agreed.

In 1912, Finney succeeded Enoch Edwards as secretary and agent of the North Staffs Miners’ Federation.

He was a member of the Stoke-on-Trent County Borough Council, and served as a magistrate on the Burslem bench. In 1916, he was elected Labour MP for NW Staffs, returned unopposed at a by election on the death of Albert Stanley, the ‘Member for Mow Cop’.

In 1918, when the constituency was abolished, he became MP for the new Burslem constituency, which he held until 1922, when he retired.

He shrank from publicity, and it was said of him:

‘His honours have come to him unsought. They are unmistakable tokens of the esteem of men who have known him as work-fellow and learned to trust him as leader. Shrewd in business, he is ever generous in his estimate of others. His dry humour has saved many an awkward situation, and his judgments, arrived at after long and earnest thought, command the utmost respect.’

In 1884 he married Mary Ellen, the daughter of James Bagnall of Ellesmere, Shropshire, and they had four daughters.  He often declared that ‘next to finding the Saviour, this was the best day’s work ever done by me. She must have credit for whatever good I have been able to achieve.’