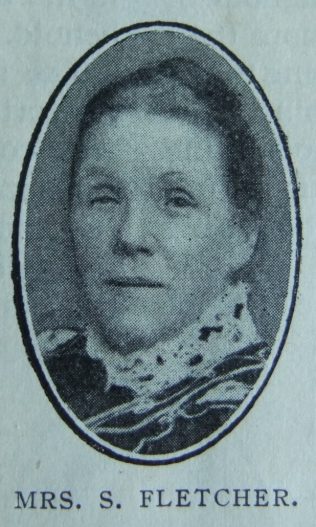 Transcription of obituary In the Christian Messenger

For many years Mrs. Fletcher, resided at Viney Hall in the Pillowell Circuit and in her forest home was well known and much respected. Left many years ago, with a family of six children, she struggled with her difficulties and developed a prosperous business. Her marriage with Mr. W.J. Fletcher was a very happy union. And the cause of Viney Hill owes much to her generosity and ready help. Her house was the preachers’ home. On retiring from business, Mr. and Mrs. Fletcher sought rest and quiet in the evening of life in the city of Gloucester. For sixteen years Mrs. Fletcher rendered willing assistance as far as able in all the activities of Barton Street Church.

For about three years her health has been failing, but the end came very suddenly, when, after taking a little nourishment she gently passed away in her chair. It was a great shock to all her family and numerous friends. The interment took place at Viney Hall, a preliminary service being conducted in the Barton Street Church by the Revs. T.R. Holtby, T. Rendall and R. Street. This service was largely attended. Among the numerous wreaths was one from the members of the Ladies’ Sewing Meeting, of which Mrs. Fletcher has been a member for sixteen years.

Sarah was buried on 29 February 1912 at Viney Hill, Gloucestershire. She died at Gloucester.