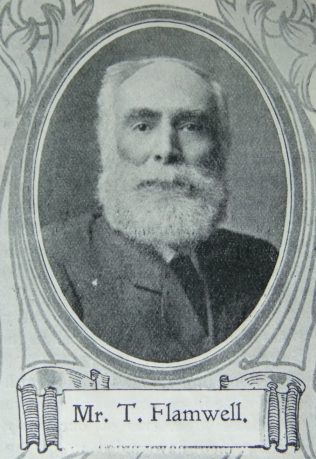 Mr. Thomas Flamwell, the senior Circuit Steward of the Worksop Circuit is most highly respected and esteemed by all who know him. He was born at Woolstone, Buckinghamshire, 1840. In early life he had to begin to work and has had to rely on his own efforts and the blessing of God for success. He came to Worksop over forty years ago, and for many years has carried on business as practical engineer. He joined our church in 1861, and for forty-seven years has been an earnest worker, and so far as his means would allow a most liberal supporter of God’s cause.

For forty years he has been superintendent of the Sunday School, also holds office as local preacher, class leader, and chapel treasurer. The honour of Presidency of the Free Church Council has been given to him, and he is at present President of the Worksop Sunday School Union. Mrs Flamwell is one of our most devoted unobtrusive workers. May their years of service yet be many.

Thomas was born in 1840 at Woolstone, Buckinghamshire. His widowed mother, Fanny, was receiving parish relief at the time of the 1851 census.

Thomas married Elizabeth Naylor (1836-1871) in the spring of 1861 at Lincoln, Lincolnshire. Census returns identify one child.

Thomas married Louisa Naylor (abt1843-1925) in the summer of 1872 at Worksop, Nottinghamshire. Louisa was a younger sister of Elizabeth. Census returns identify one child.