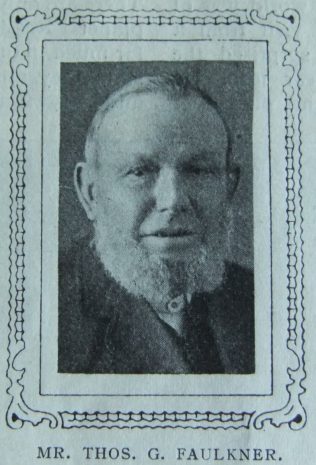 MR. T. G. FAULKNER is of that sturdy type of character which stands for all that is best in village Primitive Methodism. As Society steward and Sunday school superintendent of Lower Heyford Church, in the Northampton Third Circuit, Bro. Faulkner has for over fifty years been the main figure and chief supporter of a healthy village society, a most constant and devoted worker, a regular attendant at all the services, Sunday and week-day, a man of much prayer and faith, a stalwart for religious liberty and Free Church principles generally.

There being no Nonconformist Chapel licensed for marriages in the village of Abthorp, from whence he took his bride, the young couple journeyed some five miles distant to a Wesleyan Chapel. “As we were dissenters, we preferred to be married at chapel, even at the cost of a little inconvenience,” said the young bridegroom.

Mr. Faulkner was born at Heyford, has reached the span of three score years and ten, and continues to serve the church most faithfully. Beginning work early he has had a hard and vigorous life. He first went to work on a farm at threepence a day, later taking to the shoe trade. His life-long business, however, has been as a baker, building up a considerable village trade which to-day is carried on by his son.

For many years he was a member of the Northampton Board of Guardians; a member of the Parish Council and one of the School Managers, and has done much for the good of his native village, earning the goodwill and high esteem of his fellows for miles round.

He has been twice elected delegate to the London First District Meeting and once to Conference.

Thomas was baptised on 16 June 1843 at Nether Heyford, Northamptonshire. His mother was Elizabeth.