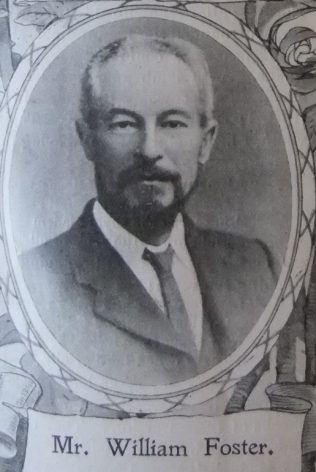 For the twenty-four years he has been identified with Primitive Methodism, Mr William Foster has devoted his time and resources without stint to her interests. At Hawes Junction his name was placed on the plan “without even consulting him.” At Appleby and Skipton he did good work, and on removing to Carlisle in 1890, he threw himself with characteristic energy into the work of the circuit. Popular as a preacher, his high character, business ability, and sound judgment soon won confidence. Thrice he has been a delegate to District Meeting and once to Conference. Circuit Steward since 1898, trustee and treasurer for the Manse and Cecil Street chapel he is a model treasurer and a skilful and enthusiastic financier. He is ably seconded in every good work by his devoted wife whose services to our church are equally deserving of recognition.

William was born on 17 April 1852 in East Bridgford, Nottinghamshire to parents Frederick Foster and Ellen Bradwell. Frederick worked the land.

William worked on the railways after spending some time in service as a footman in his teens. He was a railway ticket collector, stationmaster and railway traffic inspector.