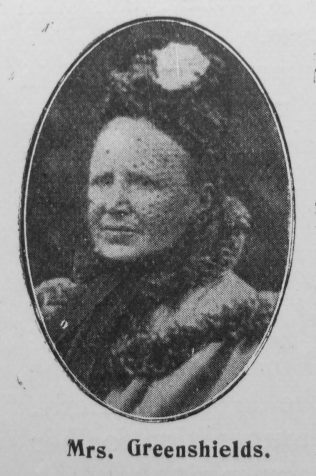 Transcription of Obituary In the Primitive Methodist Magazine by L. Stafford

Mrs. Amelia Greenshields was the daughter of Mr. Crouch, and was born at Catsfield, near Battle, Sussex. Her father was a Wesleyan class leader, a most exemplary Christian, always making a home for the preachers, whether lay or ministerial. Amelia and her sisters were actively engaged in the choir, in distributing tracts, and, Martha-like, in catering for the servants of the Lord. She seems in this way to have grown into the grace of God. Her faith in Christ was always sunny and bright – quiet, but genuine as a sunbeam. Her life was a true example of her faith.

At the age of 23 she was married to Mr. William Greenshields on October 30th, 1860. The marriage was a happy one. Many years ago they came to live at Bradfield, about mid-way between Reading and Newbury. Here her husband created the widely known water-cress beds. From these beds London, Cardiff, and other places are supplied with water-cress. Mrs. Greenshields took much of the responsibility of this business as well as that of Frogmore farm, and was highly respected by the workpeople. Having a clear head, and a strong will, yet accompanied with a sunny face, a quiet demeanour, every detail came under her notice, Nothing would grieve her more than unkindness to animals. In the stable is the following notice, in print, placed there at her suggestion:-
THE HORSE’S PETITION TO HIS DRIVER.
“Up hill, whip me not.
Down hill, hurry me not.
On level road, spare me not.
Loose in stable forget me not.
Of hay and corn rob me not.
Of clean water stint me not.
With sponge and brush neglect me not.
Of soft dry bed deprive me not.
Tired and hot leave me not,
Sick or cold chill me not.
With bit and reins oh! jerk me not,
When you are angry, strike me not.”

When they came to Bradfield they found our cause low, but they worked in the Sunday school and trained their children to attend the services. She was a most affectionate mother, a faithful wife, and a true friend to the ministers. It was a great joy to her to see the work of God prosper in the building of a new chapel and school and manse. The cause and the neighbourhood will miss her quiet but liberal gifts. One thing which indicated the spirit of her giving was that all her gifts in money were in coin new from the Mint, unsoiled and shining.

For a number of years through an internal complaint she was not able to attend the services, but her interest in the work never ceased. Some two months before her death she under-went special medical treatment, which it was hoped would be successful, but quite unexpectedly her end came on the 21st of December, 1900. She is gone, but her good influence remains. And so our loved ones pass away, but in the hope of a reunion they throw a bright, although a subdued, influence on those who survive.

On December 27th she was interred at the Bradfield Parish Church. The writer, as the resident minister, by the kind suggestion of the rector, read part of the burial service in the church and offered prayer at the grave. The Rev. F.W. Harper, as the last resident minister, read a hymn at the grave side, and preached her memorial sermon in our Bradfield Chapel on Sunday, January 13th, 1901.

Amelia was born on 18 January 1835 at Catsfield, Sussex, to parents Willian Crouch and Elizabeth.  William worked the land. She was baptised on 19 February 1825 at Hastings Wesleyan Chapel, Sussex.