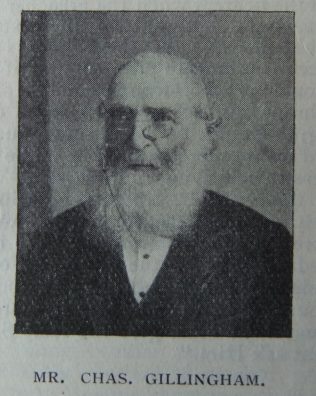 Mr. Charles Gillingham is one of the few surviving pioneers of Methodism in Kent. His association with our Church extends over an eventful period of nearly sixty years, during which time he has seen many and striking changes.

Mr. Gillingham is not a native of Tunbridge Wells. He hails from Lamberhurst, an agricultural village some eight miles distant. Lamberhurst is well known for its own exquisite natural beauty as well as for the picturesqueness of its neighbourhood. “The road plunges steeply down to the red-roofed village which – half in Sussex and half in Kent – clusters upon the banks of the Teise and forms an ideal picture in which there is scarcely a discordant tint or shape.” Here Charles Gillingham was born on the twelfth day of March in the one thousand eight hundred and twenty-eighth year of our Lord. His parents were poor and his home knew little of the luxuries of life. His father tilled the ground and his mother, by various engagements, increased the scanty income that constituted a labourer’s wage.

Mrs. Gillingham was a godly woman, a member of the local Baptist community and a regular attender at the means of grace. She was very anxious for the spiritual welfare of her son, and he, on his part, was a willing subject for her ministrations. His heart responded to those loving efforts; he attended the Baptist Sunday School and accompanied his mother to the services of the congregation. “I was at the time religiously disposed and yearned to know what was meant by conversion.” I have often heard Mr. Gillingham, now bordering on his eightieth year, speak of these early times and recall the old scenes and faces; I have seen the eye moisten and the lip quiver as he told of the unremitting care of one “loved long since and lost awhile,” and I have instinctively bowed to the perennial sovereignty of sanctified motherhood.

It was in his twentieth year that Charles Gillingham really discovered the meaning of conversion. The Wesleyans had arranged to hold a lovefeast in their Kilndown Chapel on the second Sunday of January, 1848. A friend told Charles of this and suggested that they should go together. Charles was very willing, he had heard a good deal about lovefeasts, and was anxious to attend one for himself. When the two travellers from Lamberhusrt arrived they found the little chapel crowded, but they managed to secure an entrance. It was a memorable Pentecost! The young man felt that the Holy Spirit was strongly affecting him: it seemed as though a Supreme Power held him in a firm grip: he cried out for mercy, and, amid the tears and rejoicings of the good people present, he confessed faith in the atoning work of Jesus Christ. He never forgot his visit to Kilndown and from that day to this he has been a consistent believer in the divine mission of the Methodist Agape. Immediately after his conversion, he joined in membership with the Wesleyan Society of his native village, became a teacher in the Sunday school, and ultimately an exhorter on the Circuit plan.

In 1849 Mr. Gillingham removed to Tunbridge Wells. He caused his membership to be transferred from Lamberhusrt and identified himself with the Wesleyan congregation that worshipped in Vale Royal. But about this time he became acquainted with the Primitive Methodists. He heard of the stirring times that were being experienced at Marden, a village of some importance in the heart of Hopland. The fervour of the evangelists, the intensity of their message, the power of their appeals and the gracious results that were being seen awakened a sympathetic response in him. He felt that here was a revival after his own heart and one in which he could render acceptable service. He attended a camp meeting promoted by the evangelists – held during 1852 on Lamberhurst Down, and so impressed was he by the novelty and spirituality of the services that he persuaded the leader (Rev. James Waller, of Goudhurst) to arrange for a similar gathering on the renowned Common of Tunbridge Wells. When in 1853 the Rev. Matthew Totten walked from Goudhurst to open the campaign in this fashionable health resort, Charles Gillingham was the man who received him and bade him welcome. It is a long way back to the time of these events, but their memory is evergreen. They were historic events – as the sound of a going in the tops of the mulberry trees that betokened the near fulfilment of the promises of God. Mr. Gillingham never tires of rehearsing them, for they were the beginning of a mighty work of grace.

The spot on the common where this first camp meeting was held is simply ideal. I have stood upon it many times and felt the thrill of its unsurpassed beauty as well as the sacredness of its associations. It lies on the slope of Mount Edgecombe, the summit of which is crowned with a blaze of blossoming furze for many months of the year. To the left are the sandy rocks about which the children delight to climb, and beyond is proud Mount Ephraim. To the right stretches a magnificent valley – the Happy Valley – part of which is monopolized by the town and part by wood and running brook, while in the distance rises Crowborough Deacon from which in olden times, the approach of the Great Armada was made known to the redoubtable men of Kent, and which looks like a sentinel keeping watch over the country around. Amid this prodigal beauty of nature gathered the small company of friends who had been advised of the service. In the centre was Matthew Totten, a man in the prime of early manhood, tall and thin but aflame with sanctified enthusiasm. By his side stood Charles Gillingham – short, burly, unlettered – but no less zealous than his leader. Matthew Totten announced:
“Come, O come, thou vilest sinner; Christ is ready to receive;
Weak and wounded, sick and sore, Jesus’ balm can cure more.”

Charles Gillingham commenced the singing in a deep, resonant, baritone voice, and the people joined in with ever-increasing fervour until they could be heard far and wide. The leisured visitors were startled; they marvelled at the courage of these simple, rude people, and some began to mock. But Matthew Totten and his supporters had come at God’s bidding and God’s work they were determined to do. Before the day closed they had the joy of seeing many, among whom some were visitors, profess conversion. Events now followed in quick succession. Mr. Gillingham resigned his membership with the Wesleyan Society, formed a few who sympathised with the camp meeting movement into a society class, and installed himself as leader. He opened his house for the meetings of the class and found hospitality for the preachers who came from Goudhurst to minister the infant community. Soon Mr. Gillingham became a local preacher on the plan of the Goudhurst Mission, and formed that definite association with Primitive Methodism which has continued to the present.

For more than half a century Mr. Gillingham has held the offices of Class leader and Local Preacher in connection with Camden Road Church. In the former position he has exerted a good influence over the spiritual life of the society. He knows well how to conduct a class, for he was trained in the school of the Rev. Jesse Ashworth and he never fails to make it profitable. He is at home in meetings for prayer and, by common consent, leads the devotions at the close of the Sunday evening service. He is one of the few remaining trustees who were appointed in 1857 by Mr. Ashworth, and has always given generous and consistent financial support to the expenses of the Church. As a Local Preacher Mr. Gillingham knows something of the strenuous life. At one time Tunbridge Wells Circuit covered a very wide area, and as there was no railway accommodation this involved long and arduous travelling. Mr. Gillingham took his full share. He has walked miles to his appointments on Sunday, arriving home in the early hours of the next day. But he made no complaint of this, for the greatness of the physical strain was often forgotten in the blessedness of seeing sinners surrender themselves to the Lord Jesus Christ. Mr. Gillingham still takes his turn in the town pulpit. True the weight of advancing years tells upon the vigour of his body and the strength of his voice, but his mind remains wonderfully active and his addresses, delivered with some of the old fire, are always much enjoyed.

He is one of the striking personalities of Camden Road Church. His hair and beard are as white as snow.

“Age sits with decent grace upon his visage,
And worthily becomes his silver locks;
He wears the marks of many years well spent,
Of virtue, truth well tried, and wise experience.”

As the preacher cast his eye over the congregation he signals him from everybody else and knows that there is one present, at least, who will give close attention to every part of the service. Mr. Gillingham never willingly misses the class meeting and week-night preaching. Indeed though so many years have rolled away, and so many old comrades have been gathered home since he first took up the good work, he is as interested and devoted and regular as ever. He is now enjoying a quiet eventide, the just reward of such a strenuous career. He says: “ I feel myself getting very feeble; the Lord has been very good to me.” It is always a benediction to visit this aged servant. One seem to be brought into close touch both with the far distant years that stretch behind and also with a promising future that craves to bestow its imperishable gifts. As I have drawn the door of his sanctum and stepped into the open road I have open found myself repeating

“An old age serene and bright,
And lovely as a Lapland night,
Shall lead thee to thy grave.”

Charles was baptised on 6 April 1828 at Lamberhurst, Kent. His parents were John, an agricultural labourer, and Philadelphia.