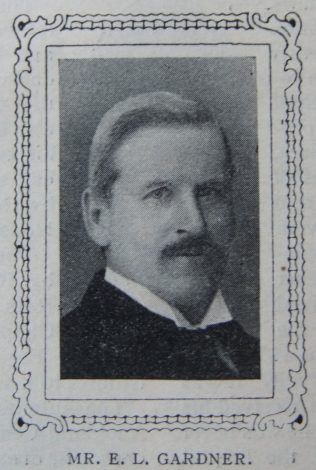 MR. EDWARD L. GARDNER, was born into it Christian home in the year 1865. His father was an honoured local preacher. The happy issue of these privileged circumstances was seen, when, at the age of sixteen, Mr. Gardner was converted, and became a member of our Church at Purton, in the Brinkworth Circuit. There he has rendered valuable service, devoting his versatile gifts to the welfare of the cause. He became a local preacher in 1888, and a Class leader in 1894. It is difficult to say in what department of Church Work Mr. Gardner excels most, but certainly nowhere is he more at home, and more dearly loved than in his place in the Class Meeting. There are thirty-nine members in the roll of membership, and the splendid average attendance every Sunday morning at 1130 gives evidence of the confidence of the members in their leader. Being of a bright, sunny disposition himself, he sets before them the joyous side of the Christian life, and thus helps them to forget sorrow and difficulty and press on to the highest ideals.

A vigorous, healthy, greatly desired means of grace is the result. Mr. Gardner, besides being a Class leader and a local preacher, is Society steward, Sunday school superintendent, Trust treasurer, and senior Circuit steward. The members of the Quarterly Meeting have shown their appreciation of his life and labour by electing him as a delegate to the District Meeting.

In all that is good, Mrs. Gardner is a constant source of inspiration to her husband. Mr. Gardner is just in his prime, his mind is cultivated, his energies are devoted to the service of the Christ, and there are, we trust, many years of increasing usefulness in store for him, before life’s evening comes.

Edward was born in 1865 at Purton, Wiltshire, to parents Charles and Pomona. Charles was a grocer and farmer.

Edward was a baker and grocer.

Edward married Mercy Sweeper (1868-1890) in the spring of 1889 in the Cricklade Registration District, Wiltshire.