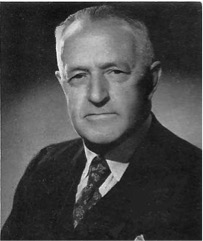 Edwin Gooch was born in Wymondham, Norfolk, on 15 January 1889 into a long-standing Primitive Methodist family in the town.  He began his working life in his father’s blacksmith’s shop.  Later he became a journalist and in 1911 was appointed sub-editor of the Norwich Mercury newspaper.  He founded the National Union of Journalists.

He joined the Labour Party in 1918 and later became Chairman of South Norfolk Labour Party.  He acted as Election Agent for George Edwards in two elections.

Edwin married Ethel Banham who also came from a Wymondham Primitive Methodist family.   She helped her husband in his public work and served with him on Norfolk County Council.   Both were appointed as Aldermen.  Mrs Gooch was also Chairman of Wymondham Urban District Council – Ethel was the first woman member in 1935 and the first woman chairman in 1951.  Both served on the Bench as Justices of the Peace.  Ethel Gooch died in 1953 and a road in Wymondham was named in her memory a few years later.

Edwin Gooch was a member of Norfolk County Council from 1922 and was vice-chairman for eighteen years.

When the Trades Union and Labour movement held a memorial service for George Edwards in Fakenham Central Cinema on 7 January 1934, an address was given by Edwin Gooch. In October of that year, on behalf of the National Union of Agricultural Workers, he unveiled a memorial stone in Fakenham Cemetery in memory of Edwards who had founded the union in 1906.

Edwin Gooch was Chairman of the Labour Party’s National Executive from 1955-6 after serving on the National Executive for ten years.  He was elected as Labour Member of Parliament for North Norfolk in 1945 and retained the seat until he retired in 1964.

He served on numerous committees both national and international, mostly relating to agriculture and rural interests and he frequently travelled abroad to conferences and committees concerned with food production and farm employment.

For his services to public life he was awarded a CBE in 1944.  He was Chairman of the Norfolk Education Committee and governor of Norwich School and was President of the Royal Norfolk Agricultural Association.

In 1960 he married Mary Curl who had been an active Labour Party member for many years.

He died aged 75 on 2 August 1964 in Wymondham. At his funeral all the seats in the Methodist church were full.  The address was given by Lord Wise, former Member of Parliament for King’s Lynn and the blessing was pronounced by the Bishop of Norwich, Dr Lancelot Fleming.  The following week a memorial service was held at Wymondham Abbey and was attended by more than 500 people.