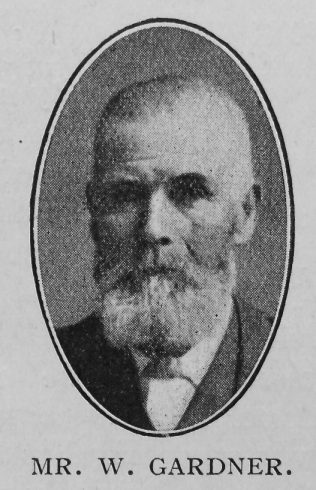 Transcription of obituary published in the Primitive Methodist Magazine by R.S.

Mr. William Gardner filled a prominent place in the Frosterly Society (Westgate Circuit), for a great number of years, and served its interests as trustee, Sunday School teacher, and society steward.

His association with Primitive Methodism was lifelong, and for twenty-one years he faithfully discharged the duties of society steward. Every detail received careful attention, and all his financial affairs were kept with exactitude and orderliness.

His loss to the church is immeasurable. After much suffering he passed away March 13th, 1912, aged sixty-six years. He was most generous in his support of Circuit and Connexional institutions, and left in his will various amounts to the Sunday School and other funds. For a great number of years he provided a home for the preachers. His sons are also serving the Church.

William was born abt1846 at Stanhope, Co. Durham. I have not been able to identify William’s parents in online records.

He married Mary Gardner (1842-1905) in the summer of 1869 in the Weardale Registration District. Census returns identify three children.