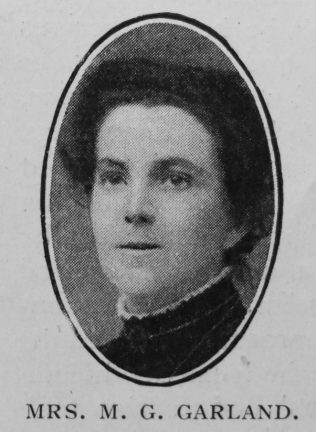 The Flushing Church in the Falmouth Station has suffered a heavy loss by the death of Mrs. Mary G. Garland, wife of the Society Steward and Superintendent of the School. Born in 1872, she was the daughter of Mr. and Mrs. James Davies, of Flushing. She was a scholar and afterwards a teacher in the Sunday School, Assistant Organist in the choir, and most active in every form of work in connection with the Church. She was a woman of a superior order, and highly esteemed by all who had the privilege of knowing her.

Her illness lasted three years. Her husband and daughter (Nora) were most devoted and attentive, and the best medical aid was secured. But in spite o. all that could be done she gradually sank. On Sunday, March 10th, 1912, she had a serious attack of haemorrhage, and passed to the higher service.

The funeral took place on March 14th, amid every manifestation of respect and sympathy. The service in the chapel and in Mylor Churchyard was conducted by the Rev. J. Jenkins.

Mary was born in 1872 at Flushing, Cornwall, to parents James Davies, a bookmaker (1881), and Priscilla Mitchell.