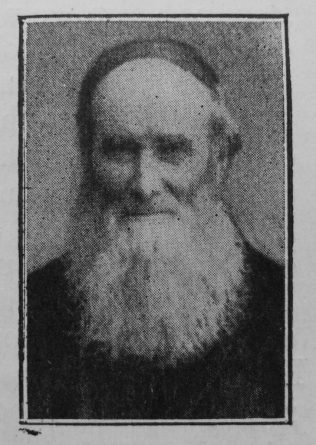 Henry Gatward was born in Castle Hedingham, Essex. He came to London at the age of twenty-seven, and was converted in our London Lane Mission Room. He was greatly blessed through the ministrations of the now  sainted Rev. Edward Bishop. He continued his membership with our people, and removed with them to London Fields, after the erection of the new chapel. In a short time he was appointed a class leader, and continued in that position for many years, He was also Sunday School Superintendent for ten years. To fill those appointments meant a great struggle, for at that time he was in business and kept a number of horses, and rather than allow his men to work on a Sunday, he attended to the horses himself. Being very genial in disposition, and very gentle in manner, he was admirably adapted for the offices to which he was appointed.

His family numbered ten in all, and such was the effect of his life upon them, that nearly all have followed in his steps and have become Christians. After giving up his work at the somewhat early age of sixty-five, through affliction, he cultivated the Christian graces in the home as but few have done. For during his prolonged affliction of fourteen years, he was never heard to murmur.

His affection for his wife (who still survives him) and his family was very great, and his devotion to our Church exemplary. He fell on sleep on Sunday morning, July 22nd, 1906, at the age of seventy-nine. A memorial service was held in London Fields Church, when the Rev, Chas. Spooner preached from Revelation vii. 17, “For the Lamb which is in the midst of the throne shall feed them, and shall lead them unto living fountains of waters; and God shall wipe away all tears from their eyes.”

Henry was born to parents Edward, a butcher, and Maria.