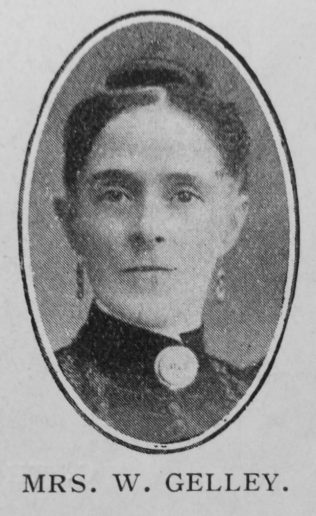 The large concourse of ministers, representatives of the Thornley Circuit, and personal friends which assembled in the Thornley Church on Sunday, October 8th, and afterwards in the Wheatley Hill Cemetery, showed the great respect and love borne towards the late Mrs. Gelley and also their profound sympathy with the bereaved husband (Rev. William Gelley) and his family.

It is now nearly fifty years since the writer made her acquaintance. She was then young and charming, with a clear, bright eye and an intelligent face. There were finely blended in her reserve and frankness, quietude and earnest, joyous service. She won the friendship of everyone by her delicate maiden modesty.

Very early in life she showed religious inclinations, ultimately attending our church at Filling, near Gateshead. When Windy Nook, the village in which she lived, was missioned by our people, she was one of the first members, and also joined the choir. It is forty-seven years since she married William Gelley, then a local preacher living in Gateshead. When he was called by the owners of Ryhope Colliery to do the work of an evangelist among their workmen, she shared the mission work with him—a work rarely, if ever, excelled in the North of England. After this, when the successful evangelist was called into the regular ministry as a married man with two children, it was for Mrs. Gelley to solve the problem how, with the scanty allowance made in such cases, she must keep her husband in ministerial garb and meet the needs of her home and children.

With a splendid heroism she bore the burden, never, either during his probation or afterwards, troubling her husband with financial cares. It was, in fact, in the home that her character and piety found their true sphere. While working for the churches over which her husband was placed, she brought up a large family of sons and daughters on whom she bestowed loving care and devotion. To promote their welfare was her great ambition, and she did it nobly. Her children still call her blessed.

Her illness came as a terrible surprise. Her agony at times was indescribable, but she was brave and patient. Though never highly demonstrative in her religious emotions, her faith failed not, and as her husband prayed with her, her heart went out in full trust in the Saviour. When free from the more severe pain she sang old hymns to the old tunes of her girlhood, among her favourites being:— “Jesus, the very thought of Thee,” and “Am I a soldier of the cross?” A few days before her death Mr. Gelley said to her:— “If you have full trust and feel that Christ is your Saviour, put up your hand.” She was too weak to speak, but up went the hand as the last testimony of her living faith, and in that faith on the morning of October 5th, 1911, she passed away like a child falling asleep.

Isabella was born in 1845 at Windy Nook, nr. Gateshead, Co. Durham. I have not been able to identify her parents in online records.