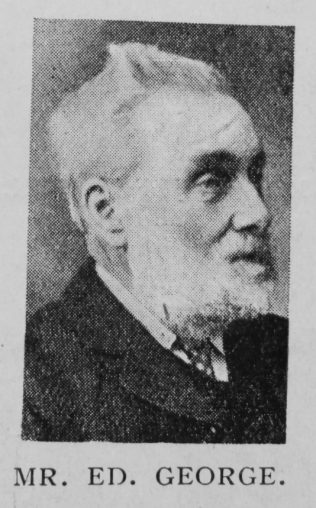 Transcription of obituary published in the Primitive Methodist Magazine by W.D.

Edward George, of Oswestry, local preacher, society steward, Sunday school superintendent, class leader, went to his reward May 27th, 1911. All these offices at one time and another he not only  filled, but adorned. One cannot think of the place he loved so much without thinking also of him.

A man of strong will and strong feeling, of high moral tone, gentle as a child until roused into righteous passion, with a heart of gold, his quaint, original way of doing things had a charm of its own which made him outstanding and impressive. A more loyal, devoted servant of the Church it would be difficult to find.

With the most scrupulous care he discharged the duty that came to his hand; nothing for which he was responsible was overlooked, and he was never in a hurry. We like to talk of his kindly interest in the deserving poor, his gracious bearing towards the little ones, his essential purity. For nearly fifty years he held an honourable place in a church which owes to him, under the divine blessing, more than it can know. His last days were full of peace. He died triumphant.

Edward was born in 1833 at Llanbadarnfynydd, Radnorshire, to parents John George, a farmer, and Ann Hamer.