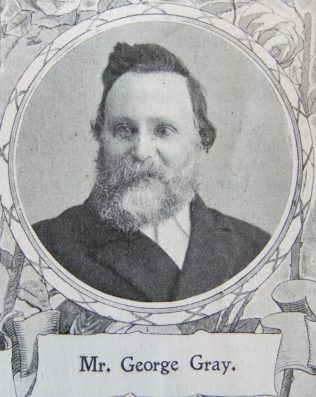 Mr. G. Gray, for over thirty years has had a successful business career in Whitby, Yorkshire, and has rendered excellent service in various public positions, notably twelve years on the Urban District Council, of which for two years he was chairman. Joining our Church in 1853, and becoming a local preacher in 1855, he has had various positions of trust, and is at present Circuit Steward. Together with his now sainted partner, he has worked hard and given liberally for the new Church. He has been fourteen times delegate to the District Meeting (once Vice-president of the same) and five times delegate to Conference. Two years ago, he conducted a service in our Goathland Chapel, attended by the Rev. J.H. Jowett, M.A., who was on holiday. Our brother captivated the great preacher, who sent him a letter of thanks, a recent book of his, and in glowing terms referred to the sermon soon afterwards, in his own pulpit.

George died on 24 May 1910 at Whitby. His obituary published in the Primitive Methodist Magazine by A.J Bull is attached.