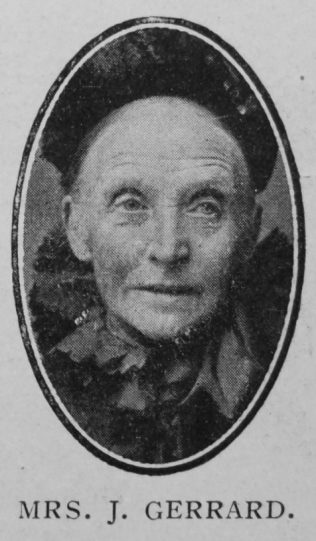 Transcription of obituary published in the Primitive Methodist Magazine by F.W. Brett

Primitive Methodism in Swinton, near Manchester, has sustained a great loss by the decease of Mrs. Jonathan Gerrard, which took place on November 4th, 1911. Born at Walkden 76 years ago, at the age of 14 she joined the Church, and therefore was a member for 62 years. Her father and mother were Primitive Methodists, and her only brother (James Lee) had a very successful career in our ministry, but passed to his reward several years ago.

After marriage she came to live at Swinton, and attended the cellar chapel at Wardley Lane until a new chapel was erected. Having removed to Worsley Road she joined the Swinton Bar Society (now Manchester) when it was formed in 1871. Here she rendered most devoted service, and no one can tell how much the success of that Church is due to the godly lives and earnest prayers of Mr. and Mrs. Gerrard.

She was indeed no ordinary woman. Her sons and daughters are all Primitive Methodists, and all active workers amongst us. Verily, “her children rise up and call her blessed.” What a legacy of noble, Christian motherhood! She was a true help-mate of her husband, and he often confessed his great indebtedness to her. The home was always open for preachers of the Gospel, and generosity was abundant. She was ever praying for, and taking a kindly concern in, other people, especially those addicted to strong drink, several of whom were reformed through her persuasion. She was kind to the poor. There was no ostentation, but her work was very powerful and far-reaching.

She lives with Jesus and in lives she blessed. Rev. P. McPhail conducted a memorial service in Manchester Road Church, Nov. 12th.

Jane was born in 1834 at Walkden, Lancashire, to parents Thomas Lee, a collier, and Mary Cooke.