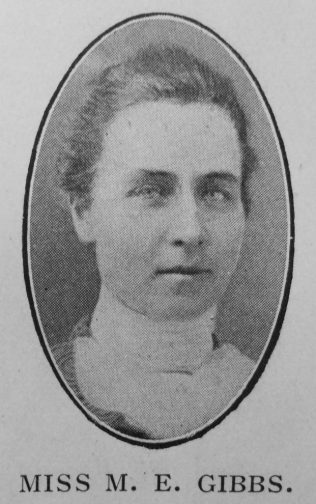 Transcription of obituary published in the Primitive Methodist Magazine by Henry J. Pickett

On October 20th, 1910, Mary Ellen Gibbs ascended to the Church triumphant. Primitive Methodism owes more than can ever be told to the family of Gibbs. Mary yielded herself to Jesus in very early life; at sixteen she was a Sunday School teacher, and at eighteen she took charge of a young men’s class, which she led with ever increasing acceptance and success for twenty-one years. Jesus was her supreme love, and His work her abounding delight. So far as physical strength permitted, she threw, herself into evangelistic work with conspicuous success, and but for the pressure of her own church claims, and the limit of physical power, she would have had a Connexional, if not national fame.

Winsome, fluent, intensely spiritual and devoted, this, added to a cultured and naturally gifted mind, made her ministry a charm and a power. The Church has lost a spiritual stalwart. But her abiding memorial is in the large and successful classes she raised, as also in the redeemed and consecrated lives led by her ministry into the Kingdom. We thank God for her gift, and when the nightless day comes, we shall serve with her in the Father’s house.

Mary was born in the spring of 1871 at Northampton, Northamptonshire, to parents Joseph Gibbs, a shoemaker employing 100 hands (1881), and Eliza Frances Britten.