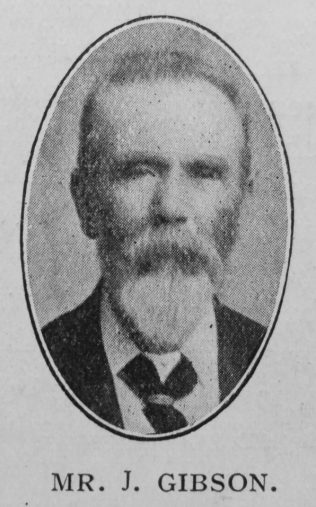 Transcription of obituary published in the Primitive Methodist Magazine by S. Palmer

John Gibson was born at Roose, in Yorkshire, but with his parents moved to Sunderland, and, when very young, attended Hopper Street Sunday School. After his marriage he left Sunderland for Liverpool, and afterwards Preston, but subsequently returned, and joined Tatham Street Church. For many years Mr. and Mrs. Gibson served this church with a faithfulness that cannot, we think, be surpassed in the annals of church membership.

John Gibson strove to live as he believed. He loved his church. Rain, snow, or sunshine, he was in his seat in Zion. The class, band, and prayer meetings were his delight. He was never long or prosy in prayer. He knew what he wanted, and went straight to the throne of grace and asked for it. He was an old-time Methodist in his love of Christian fellowship. What feasts of soul we have had at his own fireside.

He saw the end approaching for some time. John Gibson reached a noble age (seventy-three), and faced death bravely and cheerfully. We loved him, we miss him greatly, and shall never forget him. Amid many expressions of respect, we laid his remains to rest in Bishopwearmouth Cemetery, Sunderland.

He married Margaret Wiseman Cook (1836-1922) in the summer of 1859 at Sunderland, Co. Durham. Census returns identify six of seven children.