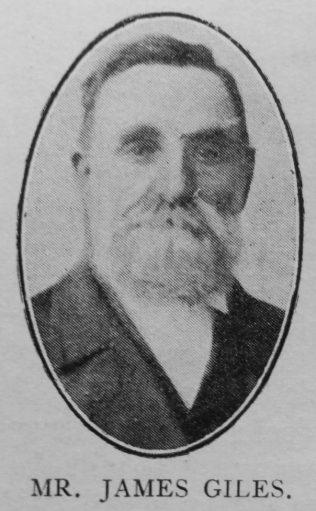 Transcription of obituary published in the Primitive Methodist Magazine by E.E.F.

Bro. Giles, a member of our Friar Street Chapel, Reading, who passed away on November 14th, 1909, at the age of 78 years, was born at Hungerford, Berks. He was converted when a lad of 15 years of age, and soon evinced ability and enthusiasm, which marked him out for useful service. About two years after his conversion our brother was placed on the preacher’s plan, and became known all around as the boy preacher. As a mere youth he created a big impression at a huge camp meeting held at Hungerford Downs, at which, in spite of considerable opposition at the outset, many souls were saved.

During one portion of his life Bro. Giles worked in close association with Joseph Arch, on behalf of the agricultural labourers.

In the year 1879 our brother removed to Reading, and at once became a member of our Friar Street Church, with which also his numerous family have ever since been associated. Here he devoted himself most whole-heartedly to the work of preaching the Gospel.

The eventide of our brother’s life has been clouded with much affliction. For several years he has been laid aside from active labour through continued ill-health.

The funeral took place on November 19th, 1909, and was conducted by Revs. W. Raistrick and E.E. Fisher.

James was born abt1831 at Hungerford, Berkshire, to mother Susan. He was baptised on 28 August 1831 at Hungerford. Census returns for 1841 and 1851 suggest that he was brought up by his grandparents, William, a bricklayer (1841), and Jane.