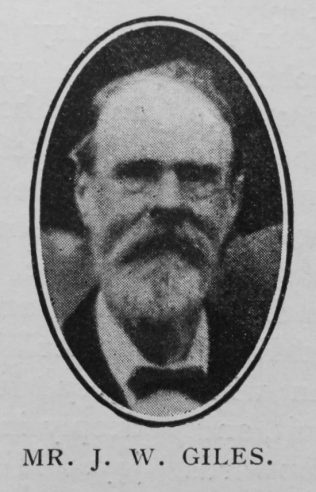 Mr. James W. Giles, of Belvedere Church and Erith, and Belvedere Circuit, passed away after a brief illness on Dec. 18th, 1911, at the age of 73 years. His work was done, and the Master called him while in harness.

He commenced his work in the Circuit more than forty years ago. First as Superintendent of the Sunday School and Choirmaster at Erith, subsequently he removed to Belvedere and came “upon the plan,” in which position he has rendered long and very fine service both on his own Circuit and many of those surrounding.

He has always been a tower of strength in all kinds of meetings, finely loyal to his Church, popular with all classes, a wise counsellor in business meetings, of keen intellect, discharging his duties with singular ability.

The funeral service was conducted by an old friend and former minister, Rev. T. Peatfield, the church being crowded by those wishful of paying a last tribute to a fine life. The interment took place at Erith old churchyard.

James was born in 1839 in the City of London, to parents James, a paper stainer (1851), and Pauluna Wolfenden.