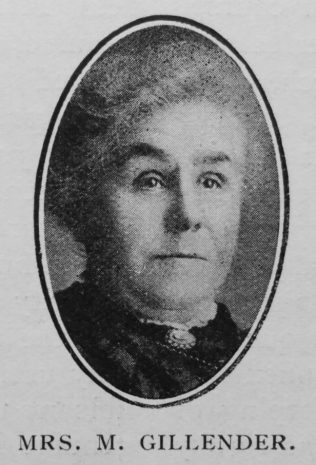 Transcription of obituary published in the Primitive Methodist Magazine by R.G.

Mrs. Mary Gillender, wife of Rev. Robert Gillender, died at Milfield, in the Lowick Circuit, on January 12th, 1912, aged 58 years. She was born at Ellenborough, in the Maryport Circuit, Feb. 14th, 1853, and removed in her early life with her parents to Cockermouth, where she lived till her marriage. Her father, Mr. Henry Williamson, was one of our local preachers, and her mother was a useful member of our Church, and kept an open house both for ministers and local preachers. Their daughter Mary was a Sunday School teacher, a member of the choir, and a missionary collector in our church at Cockermouth up to her marriage.

For over thirty years she has been the cheerful companion and constant helper of her husband in all his circuits, where she was highly esteemed for her high character and valuable services. Her husband and two daughters and two sons survive to mourn their loss of a true wife and a devoted mother. Her home at Milfield, as at other places, was ever open for hospitality to ministers and local preachers. She visited the members and others, and often gave sympathy and help to the aged, the afflicted, and the poor. The choir, teachers and Endeavour class spent a happy evening at the Manse at Christmas, when Mrs. Gillender cheerfully did her best for their enjoyment.

Her illness was of short duration, during which she prayed, “Lord, give me patience.” She walked to bed at half-past nine at night, and died with a radiant smile of recognition and peace on her face before eleven. She was interred at Whickham on January 16th in the same grave as her father-in-law, Mr. Robert Gillender. The funeral services were conducted by Revs. A. Allwork, John Upright, and C.G. Tetley.

Mary was born on 14 February 1853 at Ellenborough, Cumberland, to parents Henry, a coal mine engineman (1861), and Isabella.

She married Robert Gillender (1854-1918), a PM minister, in the summer of 1881 at Cockermouth, Cumberland. Census returns identify four children.