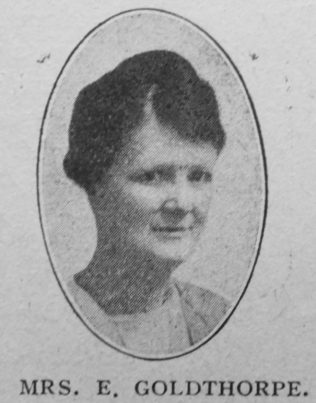 Transcription of obituary published in the Primitive Methodist Magazine by F. Pickering

Annie Elizabeth, the wife of the Rev. E. Goldthorpe, of Amble, died on February 5th, aged forty years, and was buried on February 7th, 1920. Mrs. Goldthorpe had been closely connected with our Church from infancy, and spent the larger part of her life at Shipley. She was an official of the C.E. and Sunday school teacher at our Saltaire Road Church, and took a deep delight in all that promised it prosperity. When the Women’s Auxiliary was commenced, she was its first secretary. Her gifts were not of the order which demand an audience for their exercise, but of the equally valuable kind which find a fitting sphere in domestic duty. When her husband was called into the ministry, and she was fully informed of the difficulties which belong to the position of a married probationer in our Church, Mrs. Goldthorpe assisted her husband and made his path easier by gladly accepting her share of the burden, and by her fortitude during those years of testing. Quietly, modestly, and hopefully she accepted the task, and faithfully carried out its obligations to the end. Just at the end of her  husband’s probation she passed away, and deprived her husband of half the joy of his success, which his loneliness made it impossible for him to share.

The funeral was attended by a large company of sorrowing and sympathetic friends who knew and esteemed Mrs. Goldthorpe, and felt deeply for the afflicted husband and his little daughter. The vicar, the Wesleyan and Congregational ministers, and many of our own ministers of the district were present, and gladly bore such testimony to the worth of the departed lady as lay in their power.

Annie was born in 1879 at Shipley, Yorkshire, to parents William and Jane.

The 1901 census records Annie as a yarn twister.

She married Enoch Goldthorpe (1882-1962) in the spring of 1905 in the North Brierley Registration District, Yorkshire. They had one child.