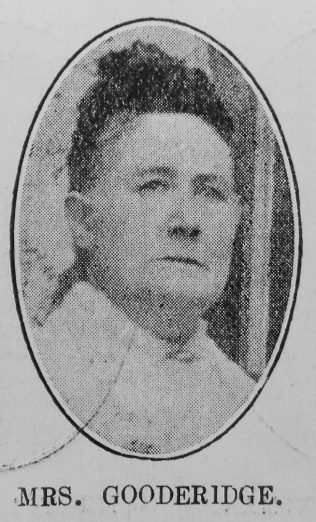 The passing of Mrs. Gooderidge has brought sorrow to many hearts. She was an arresting personality, a faithful friend, an enthusiastic devotee to Jesus Christ, and to the core a loyal, generous member of our church.

She was a preacher’s friend, not only by her many gifts, and by her alertness to speak to him the word of good cheer, but by the eager attention she always evinced in his message.

The man in the pulpit would always do better when Mrs. Gooderidge was in the pew. Many will be the days before our sense of loss, both in the home and the church, will be relieved.

She had lived for seventy-two years, most of which had been strenuous. What a noble mother she was, she taught, and led the way to God and good living.

Her family have grown up to love their parent’s Lord and Church. One of its members is the Rev. J.T. Gooderidge, of Nottingham, who is fulfilling so successful a ministry.

She had longed for quiet, and gave up her business at Blackpool in its quest. She was always welcomed by her family at London, Nottingham, and Grimsby. But God had for her the gift of rest.

In a sacramental service—the last service she attended—she took the piigrim’s meal, bore with noble courage the painful journey, and entered with joy into the Father’s House. Her pilgrimage is ended, her warfare accomplished. She has joined the great multitude who have washed their robes and made them white in the blood of the Lamb. As one by one our friends pass hence a mystic sense of the unity of the great Church of God grows upon us. Of this the young know little, but those further on in the Christian journey begin to experience a deepening consciousness of the great cloud of witnesses, an encompassing host whose presence inspires and cheers.

“One family we dwell in Him,
One Church above, beneath,
Though now divided by the stream,
The narrow stream of death.”

The 1851 census return describes Emma as an apprentice bonnet maker.

She married Thomas Gooderidge (1839-1903), a railway engine driver and later evangelist, in the spring of 1862 in the Rotherham Registration District, Yorkshire. Census returns identify six children.