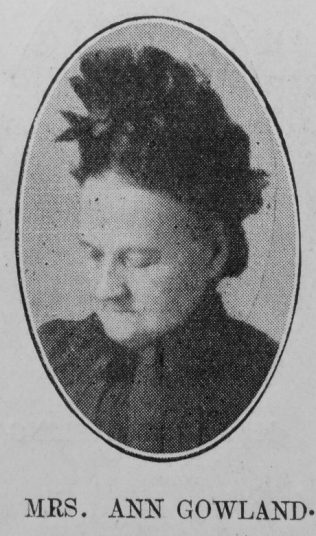 Transcription of Obituary published in the Primitive Methodist Magazine by  M. Cuthbert

Ann Gowland, of Middleton-in-Teesdale, was born on March 22nd, 1828. In early life she joined the church at Mickleton, having had the spiritual advantages of a good Christian home training. Her father and mother were amongst the early Primitive Methodists who did much to aid the church in many ways. Her brother, the late John Longstaff, was for many years a most acceptable local preacher, class leader and society steward. In this religious atmosphere, when quite young, the foundation of her character was laid deep and strong. Her religious life was like her natural disposition, cheerful and optimistic. Quiet, sincere, and practical, she gave wise counsel in church affairs, in which, during her long eventful life, she was always interested.

Our sister had great joys and deep sorrows. The greatest trial of her faith was the comparatively early death, by accident, of her husband, who at the time of his death was the highly respected circuit steward in the Middleton- in-Teesdale Circuit. Although it is nearly twenty-five years since he died his memory is fresh and green to-day. Mrs. Gowland was a true helpmate to her husband in all good works for the family and the church. While health and strength remained the means of grace, in the sanctuary, were her constant delight, and when she felt the physical weakness of declining years and could not attend the House of God, her faith grew stronger and her hope increased in brightness. She had no fear of death, Christ was precious to her, and she waited patiently the coming of her Lord, then passed away to her reward in heaven on September 20th, 1908, aged eighty years.

The writer conducted the funeral service in the chapel and at the grave. A large number of relatives and friends met to pay respect to her memory and express sympathy with the sorrowing family, who are members of our church and treading in the footsteps of their departed father and mother.

Before her marriage Ann kept house for her father.

Note: Ann’s maiden name was Langstaff, not Longstaff as implied in the obituary.