A Builder of our Church: An Appreciation 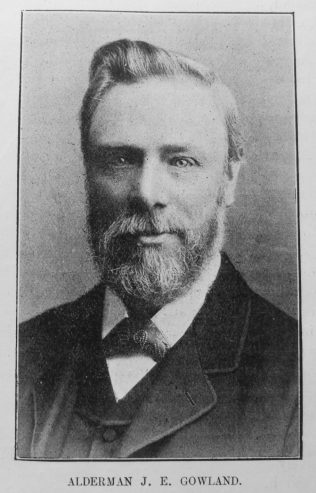 Transcription of Sketch in the Primitive Methodist Magazine by Rev. J.G. Bowran

It is well-nigh impossible for outsiders to understand the esteem and confidence, the admiration and affection with which John Gowland was regarded by the people of Gateshead and by the Primitive Methodists of that town in particular. Throughout his life he was identified with the Mother-Church of Gateshead Primitive Methodism. We remember when the society was located in Nelson Street. For years the work there was carried on under difficult and depressing conditions. The neighbourhood had deteriorated; the building was inconvenient. Amid it all our friend laboured, ever cheery, always faithful. Then came the transference of the church to the Durham Road area, first in the lecture-hall and schools which were built, then in the splendid church erected on the adjoining site. The Durham Road premises are among the best that the Connexion can boast. The progress has been marvellous. A great congregation has been gathered, the Sunday School flourishes. It is a young people’s church. Everything  prospers. Through all the years the peace has been kept and true and sacred friendships have been formed. Through it all our friend laboured and all who laboured with him would gladly confess how much of the progress and blessedness were due to him.

He was the Superintendent of the Sunday School for thirty years. The teachers would hear of no other for the post. He was an ideal superintendent, always present, patient, kind, inspiring, appreciative. Everybody loved him.

In addition he was distinguished as a class-leader. His class was one of the largest in the Connexion and its members were in regular attendance. No stereotyped order was observed. Fellowship and edification were the ideals in his mind and these he sought by varied means. Everything was so attractive that the members could not keep away.

Concerned in the directly spiritual interests of the church, he knew the importance of good management and sound finance. The business of the church was divine service to him. For many years he was the treasurer. There were times of anxiety and strain but these were faced with resolute courage and imperturbable calmness. The problems were solved and the difficulties things of the past. He was also a local preacher, serving in the circuit in the ministry of the word. It was good for the other churches to see him in the pulpit and to hear his speech.

Now that he has gone we can see that he was the unifying influence in all the departments of the church’s life. In him the church and the school were one. The Superintendent of the Sunday School, he led teachers and scholars through his society class into church-membership and interested them in all the financial and aggressive schemes of the Church. It is the fact that for years this church has been famed for its unanimity and enthusiasm. Our friend was at the heart of it all. Passing from the school to the church, from the class-meeting to the assembly of trustees, he helped to make them all one.

We suspect that he was driven into civic life. The Primitive Methodists in Gateshead have ever been to the fore in the Council of the town. In his first contest he secured more votes than those of his three competitors combined. It was his first and only contest. Thereafter he was returned unopposed. The people knew him as “Honest John.” In time he came to the Aldermanic distinction.

Attentive to his business, devoted to his church, serving the public in the widest capacity, he was nevertheless a man of the home. We remember it so well, its peacefulness and joyousness, its hospitalities and courtesies, its welcome and its warmth. Many who read these lines will recall it and every recollection will be sweet. What a man he was! Quiet, unobtrusive, gentle, forbearing, patient to the weak, kind to the erring, believing the best. So silently he went about his business! Everything in him is expressed by goodness. He was a good man. All who knew him knew that. His soul was in love with God.

How much it means to have known such a man. The Rev. Robert Hind truly says: “It was impossible for anyone who knew John Gowland not to believe in the Christian Religion, his life exemplified it so perfectly.”

The call came suddenly, though for some time his health had failed. On Sunday Jauuary 13th, 1907, he was at his place in the school and met his class. On the Tuesday he had passed to the life beyond.

We have seldom seen such a concourse of mourners as that which followed him to his grave. In addition to his colleagues on the Town Council, there were many ministers, many of the laymen of our Northern Circuits, and our people of all the societies in the two Gateshead stations.

The service was held in the Durham Road Church, the Rev. George Forstner conducting, and the Rev. John Alderson reading the Scriptures. A beautiful tribute was paid by the Rev. Henry Pratt who spoke of his friend as “a strong, quiet, religious man, the ideal of the young, the friend of the lonely, the secret benefactor, the tender husband, the gracious father, the man of God.” The Rev. Robert Hind offered prayer, giving thanks to God for such a man and such a life and pleading for the widow and family bereaved and the church in its immeasurable loss. At the grave-side, the Rev. William Gelley read the committal sentences and the Rev. James Young breathed the prayers of’ the attendant mourners.

Many letters lie before me, all grateful and loving testimonies to the memory of our friend. From two I will quote. The writers had known Mr. Gowland for the greater part of their lives. Intimately they had known him and their speech is the language of the heart.

The Rev. John Hallam writes: “I have known him nearly forty-four years and always as plain, honest, upright, practical, commonsense John Gowland, without pretence, veneer, vain ambition, pride or guile, going his own way because he thought it right and not wishful to interfere with other people’s ways.”

The Principal of Hartley College, the Rev. William Johnson, F.L.S., writes: “To know Mr. Gowland was to love him. His was the life simple, faithful, unwearied, gentle. He did not cry nor lift up his voice in the street, nor did he ever neglect or quench the ‘smoking flax’ of hope and good in another man. He always esteemed others as better than himself and was never found wanting in human sympathy and readiness to serve.”

To the widow the sincerest sympathy has been given. Theirs was an ideal wedded life. It is hard to think of them away from each other. They were one in the purest affection and faith. Three daughters are left, Mrs. William Bowran of Sunderland, Mrs. Fred Aitchison of Gateshead, and Mrs. T. Weightman of Gateshead.

All who knew him saw in him “that gentleness, which when it weds with manhood, makes a man.” His influence will abide. His name will live. He has set an ideal. Many to whom he spoke the word of God will consider the issue of his life and be compelled to imitate his faith.

John was born in 1839 at Gateshead, Co. Durham, to parents Edward, a builder, and Elizabeth.

He married Margaret Gaddes (1840-1924) in the summer of 1861 at Gateshead. Census returns identify three children.