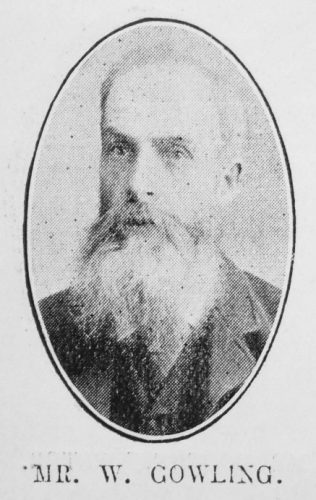 Transcription of Obituary published in the Primitive Methodist Magazine by R. Clemitson

Mr. Gowling was born at Kirkby Stephen, January 8th, 1840, and died at Gateshead, October 18th, 1908. When the writer was in the Brough Station in 1867 Mr. Gowling was engaged in active Christian work, having been converted, with other members of his family, in a revival some years before. He married Lucy, daughter of Mr. Jeremiah Jackson, of Brough, an intelligent, loyal member of our Church, and a tower of strength to our cause in Brough. The daughter inherited the finest qualities of her father. Subsequently they removed to Darlington, then to Jarrow, Newcastle and Gateshead. It is significant of much that our friends enjoyed close personal friendship with such men as Revs. Thomas Brodie, Colin C. McKechnie, Hugh Gilmore, J. Day Thompson, E.R. Davies, and Mr. Robert Foster, of Newcastle.

Mr. Gowling conscientiously performed the duties of class leader, society steward and Sunday School teacher. He was trustee for several chapels, among them Greenbank, Darlington. To a cursory observer Mr. Gowling seemed the incarnation of mildness: but he had plenty of backbone, and occasion never failed to reveal hislatent strength. “In honour preferring one another” was an injunction easy of fulfilment to him. His religion was like the Eden of his native Westmoreland—asserting its existence by the verdure along its banks. He was a good man, as all the letters of sympathy received by his widow significantly testify. After three weeks of painful affliction, borne without a murmur, he passed to his rest.

On October 21st, a largely attended service was held in the Whitehall Road Church, in which Revs. J.S. Nightingale, A. Longstaff, J.G. Soulsby and J. Alderson took part. Mr. Nightingale gave an appropriate address and conducted the service at the grave. May the God of all consolation have the lonely widow in His keeping.

“His life was gentle, and the elements
So mixed in him that Nature might stand up
And say to all the world, ‘This was a man.’ “

William was born on 8 January 1840 at Kirkby Stephen, Westmorland, to parents George, a labourer, and Catherine.