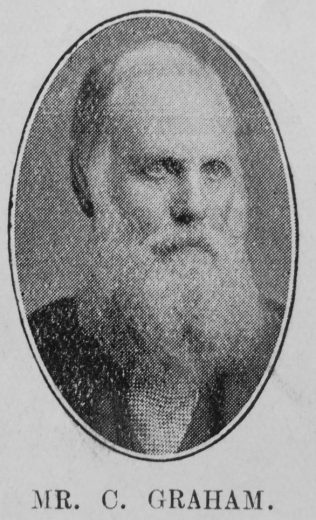 Brother Christopher Graham was born on December 14th, 1830, at the Border town of Langholm, in Dumfrieshire. He came about sixty years ago into the neighbourhood of Annfield Plain, where he resided until his death. He was converted in early youth, and his ardent and vigorous personality was consecrated to the service of Jesus Christ. He occupied the position of local preacher in the Stanley Circuit for about fifty years. Local preachership in these early days meant long and exhausting journeys, over dark and rough roads. The neighbourhood was rough in more senses than one. But our brother threw himself into the work of preaching the good news with characteristic ardour. No difficulties daunted him, no toil in the service of the Master wearied him.

Gifted with a magnificent physique, a fine voice and some powers of song, possessed of much native strength of mind, which he had assiduously cultivated and enriched by the reading of good literature, and adding to these a heart aflame with love and zeal, he was a welcome figure in the pulpit, on the camp-ground or in the street.

It was a means of grace to know him and converse with him. His nature was honesty and transparency itself. He combined two qualities not always found in conjunction—strong and decided convictions and charity and toleration for the opinions of others. In his last days his sole interest was the cause of God, the atmosphere in which he lived was the atmosphere of prayer and praise.

During last autumn it was apparent that the end of a long and arduous life was drawing near. He passed peacefully away November 17th, 1908, having nearly completed his seventy-eighth year. He leaves three sons, one of them being the Rev. John Graham, Congregationalist Minister, living in the United States.

He was buried on Saturday, November 21st, in the Harelaw Cemetery, the Revs. T. Sellors, E. Phillipson, J.G. Soulsby, and the writer taking part in the funeral service.

Christopher was born on 14 December 1830 at Langholm, Dumfrieshire, to parents John, a stone mason, and Helen.